Relatives sit near Aliou Abalaye, 4, as he lies sick on the floor near Kilometre 12 (PK12), in Bangui, Central African Republic, where internally displaced Muslims are stranded due to the ongoing sectarian violence, on March 6, 2014.
SIEGFRIED MODOLA—REUTERS
By Andrew Katz

Fewer than 1,000 Muslims of the more than 130,000 who once lived in the ramshackle capital of Central African Republic remain, the United Nations warned on Friday, after weeks of targeted attacks by largely Christian militias spurred a Muslim exodus.

Human rights experts and aid groups are increasingly worried about the demographic shift nearly a year after the mostly Muslim rebel alliance Séléka toppled the government and began a campaign of looting and killing against Bangui’s Christian population. The attacks prompted the loose organization of Christians and animists into self-defense groups called anti-balaka and led to street fighting in December that left 1,000 dead in two days. Since then, with Séléka in retreat and thousands of foreign peacekeepers unable to rein in the violence, anti-balaka have staged an unprecedented revenge almost solely based on religion.

Amos’ remarks—she also noted that 650,000 people remain displaced and the U.N. has received less than one-fifth of the $551 million in humanitarian assistance it appealed for in December—came one day after the Security Council began considering a proposal by Secretary-General Ban Ki-moon to deploy 12,000 peacekeepers to the former French colony. The African Union’s 6,000 peacekeepers and France’s 2,000 troops have struggled to contain the violence and protect civilians since being sent in after the December flare-up. If approved, Ban said it would take at least six months for the force to assemble and ship out.

(MORE: The Muslims of the Central African Republic Face a Deadly Purge)

Antonio Guterres, the U.N.’s High Commissioner for Refugees, highlighted the plight of Muslims during the Security Council meeting. “Tens of thousands of them have left the country, the second refugee outflow of the current crisis, and most of those remaining are under permanent threat,” he said. “The demon of religious cleansing must be stopped—now.”

A Human Rights Watch report released the next day added weight to his statements with grim details from towns outside the capital. “We are seeing entire Muslim communities that have lived in the Central African Republic for generations fleeing their homes,” writes Peter Bouckaert, HRW’s emergencies director. Within the last week, 650 Muslims being safeguarded in a Catholic church were evacuated from Boali, leaving the town without any left. And the Muslim populations in Baoro and Yaloké, about 4,000 and 10,000 respectively, are now nonexistent. Elsewhere, Muslims who haven’t fled face “extreme” violence from anti-balaka or are unable to leave. “The depth of the suffering caused by anti-balaka violence is just unfathomable,” Bouckaert writes. “In a misguided attempt to avenge the destruction of the Séléka, anti-balaka forces are committing horrific abuses against residents simply because they are Muslim.” 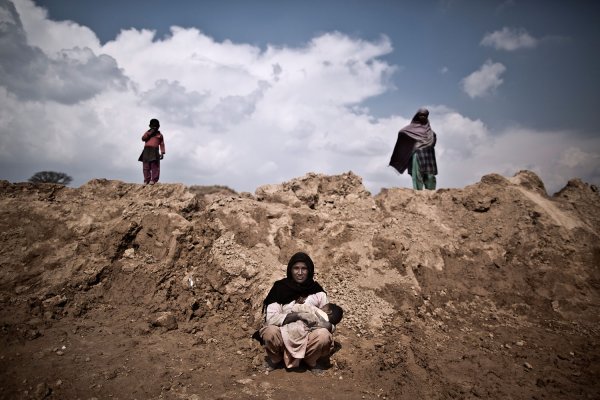 The Pakistani Women Brick-Makers Enslaved By Debt
Next Up: Editor's Pick