A dancer at the '2001 Odyssey' strip club, one of TIME's 10 strangest strip clubs in America.
Joe Raedle / Getty Images
By Eliana Dockterman

But Casa Diablo, the no-animal-products-allowed strip joint where Booker’s Twitter-friend works, is far from the only uniquely-themed establishment where women entertainers bare all. And that got us wondering what else is out there.

Turns out that themed or niche strip clubs are less popular than you might imagine. “Clubs like Caso Diablo are really not anything close to an industry norm,” said Dave Manack, editor in chief of Exotic Dancer Publications, an industry trade magazine for strip clubs. “The majority of clubs have their formula for success: Beautiful entertainers who are nude or topless or in bikinis are the draw. Not too many clubs feel like they need to go too far outside the box.”

But we were still able find some strip joints that stray further from the usual pole. Here’s a guide to America’s 10 strangest strip clubs.

This now-defunct drive-thru strip club allowed customers to watch dancers strip through a window… without ever leaving the comfort of their cars. Most customers reportedly made pit stops for only two or three minutes, paying $5 per minute to the establishment.

This strip club is dedicated to pirate lovers looking for both types of booty. In a design choice that Jack Sparrow himself would love, the outside of the club is shaped as a large jug of rum.

Around Halloween time, the Silver Dollar Strip Club transforms into a haunted house, where patrons can wander through spooky rooms. Costumed strippers aim to frighten patrons as well as turn them on.

This is usually your run-of-the-mill strip club. But bi-monthly, it has Star Wars-themed nights where girls dress up as storm troopers and other characters, and strip down past their Princess Leah-themed gold bikinis.

The club reportedly employs strippers older than the norm (aged about 45 to 60), for those looking for a more mature experience. Yelp reviewers jokingly write that this is where strippers go to retire and where men go to relive The Graduate.

In this space-themed strip club, stars and asteroids glow on the ceiling. Everything on the ground — and on strippers’ bodies — is white and glows in the black light, much like Space Mountain in Disneyland …if Space Mountain had strippers.

Alumni of the local Pioneer school were outraged when their alma mater was transformed into a strip club with a schoolhouse theme. Multiplication tables and a copy of the constitution still hang on the walls next to the stripper poles.

This roving, amateur strip club changes locations every week. The club caters mainly to young financiers looking for a girl-next-door experience — many of the young strippers have college degrees and work at start-ups or galleries during the day. The college-dorm feel leaves patrons requesting dates almost as frequently as lap dances.

This joint played only Grateful Dead songs. But since clientele can only stand to listen to “Casey Jones” so many times as they watch women dance, so the club unsurprisingly closed only 24 hours after opening.

Now notorious for one of its strippers receiving Tweets from Cory Booker, this club only serves vegan food. 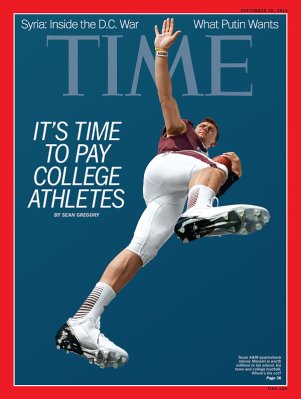 It's Time to Pay College Athletes
Next Up: Editor's Pick