Giving Away Guns For God

Last year, almost 400 religiously unaffiliated men converted to Christianity at East Bay Calvary Community Church in Traverse City, Mich., over two days. What convinced these men to give church a try? The chance to win one of 80 guns in a church-organized giveaway.

East Bay Calvary is one of dozens in the Midwest giving away firearms to entice nonbelievers, especially men, to attend services, and Chuck McAlister is often there to preach to them.

A pastor for 35 years, McAlister starred in the Adventure-Bound Outdoors television show on the Outdoor Channel and now works for the Kentucky Baptist Convention. He’s regularly invited to speak at church gun giveaways, something he says has become increasingly common in the Midwest.

(MORE: A Church-Shaped Hole in Our Lives)

“Because of the recent discussion of Second Amendment rights, it’s fueled an interest for unchurched men,” McAlister says. “The church is interested in going after them. They’re recognizing that a bridge can be built to the community through the Second Amendment.”

McAlister participates in “affinity evangelism,” which uses community activities to attract people to church and possibly convert them to Christianity. Churches within the Kentucky Baptist Convention, which has 2,400 members, often use quilting groups to reach women. Others use archery or softball tournaments. But statewide, churches are trying to piggyback off the popularity of hunting and increased discussion of the right to bear arms.

In the last two months, McAlister has spoken at about a dozen churches that handed out guns while addressing not just the Gospel but Second Amendment rights. Last year, he says he spoke in about 40 churches and saw 1,700 people turn to Christ, thanks in part to the gun giveaway. While some offer just one firearm as a door prize, a few–like the East Bay Calvary Community Church in Traverse City—give away dozens.

Churches eager to use firearms as prizes typically find a business willing to purchase the gun or donate money for one, and will then hold a giveaway in the church, often just for guests. Although they’ll display a gun—normally a hunting rifle or shotgun—for churchgoers to see, the winner actually receives a certificate to a local gun shop, where they’ll be required to go through the usual background checks and registration.

While church gun giveaways seem to be growing in popularity, they’ve been happening in small-town churches throughout the Midwest and South for decades. A few years ago, an Oklahoma church planned to give away a semiautomatic rifle to teenagers but later canceled the event. McAlister acknowledges that not everyone is happy with churches offering incentives, let alone guns, to attend church.

“Those who push back deserve to be listened to,” he says. “But people have had their sensitivity raised to Second Amendment challenges nationally, and churches are recognizing it and addressing it in a way that helps them.”

Correction: The original version of this story stated that church officials raffled off guns. They are given away as door prizes. 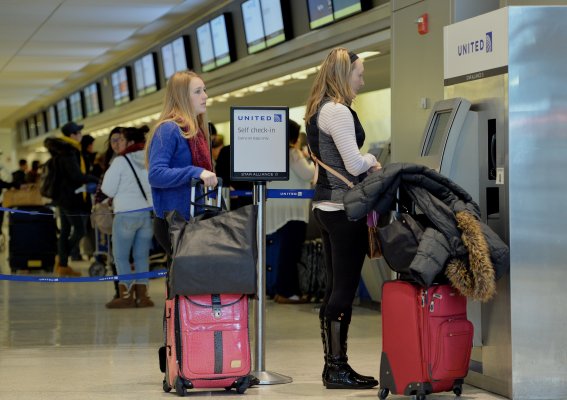 United Airlines Cracks Down On Oversized Carry-On Bags
Next Up: Editor's Pick