When new acquaintances ask Brian Joseph Burton what he does for a living, he skips the title of producer, omitting that he’s masterminded records by Norah Jones, the Black Keys and, soon, U2. He doesn’t refer to himself as a DJ, either, despite having put out what some call the best remix record ever (his unauthorized mashup of Jay-Z and the Beatles on 2004’s The Grey Album). He doesn’t even mention his role in Gnarls Barkley, the duo responsible for the neo-soul song “Crazy,” one of the most successful singles of the past decade. No, Burton, a.k.a. Danger Mouse, gives a much simpler answer. “I’m in a band, and it’s called Broken Bells,” he says. “It’s with my friend James, and it’s awesome.”

That friend, James Mercer of the Shins, is “hands down” Burton’s favorite artist to work with. While that’s quite an endorsement, given Burton’s imposing list of collaborators, Mercer also boasts an impressive list of triumphs, an indie-rock track record that few can rival. Now the partnership has yielded After the Disco, a second full-length record, due out Feb. 4. Surprisingly, Burton is emphatic that there are many more Broken Bells albums in the pipeline while he remains noncommittal about the future of Gnarls Barkley, despite the wild commercial success of that project.

Broken Bells is so dear to Burton because it’s a place where he can create his own music from scratch, something he can’t do when designing records for legends like U2. (Burton says he’s “close” to completing the group’s long-awaited record.) For Mercer, it’s a chance to sing unabashedly catchy pop. “When I was coming up, you wouldn’t dare do anything melodic. It meant you weren’t valid,” he says.

Burton grew up near New York City and in Georgia and was heavily influenced by hip-hop and R&B until he discovered classic rock in his late teens. “I thought music was basically entertainment. I didn’t think it was art,” he says in an interview at his Los Angeles home. Mercer, on the other hand, bounced around the world as a military child, spent formative years trying to repel an aggressive heavy-metal scene in Albuquerque, N.M., and quickly went in the direction of indie rock.

Despite their differences, both artists have proved to be adept at blending genres. Just as Burton helped pioneer crossovers in hip-hop, Mercer’s complex yet catchy choruses aided indie rock’s move toward melody. The duo’s self-titled 2010 debut featured an admittedly unclassifiable fusion of rock, hip-hop beats, electronica and more, and After the Disco pushes even further, which could be just the kick the listless rock genre needs. Thick synthesizer melodies channeling ’80s pop abound on nearly every track, prompting Mercer to call some of them the most straightforward pieces he’s ever composed and exactly in keeping with forward-looking tastes in indie rock. “The zeitgeist is to move into a more melodic direction, more pop,” Mercer says.

Both men have used Broken Bells as a life raft during tough times. The first record helped Mercer out of a funk fueled by strained relationships within the Shins. Burton, meanwhile, found solace in writing the second record after he hit a wall of exhaustion in late 2011. To escape, he drove cross-country for a short break. It turned into a seven-month stay in New York City, free of musicmaking, an experience that found its way into the song “The Changing Lights.” “I was just burned out. I just forgot why I do it,” Burton says. “After that, I was really craving to get back into Bells.”

Though the sweet melodies on the new album could catapult Broken Bells to the success that “Crazy” once earned, the duo’s forlorn lyrics will probably keep them from the echelon of Super Bowl performers, and that might be for the best. “Writing melodic and catchy pop stuff is fun,” Mercer says, “but for us to have to sit there and write Black Eyed Peas lyrics, we’d probably just kill ourselves.” 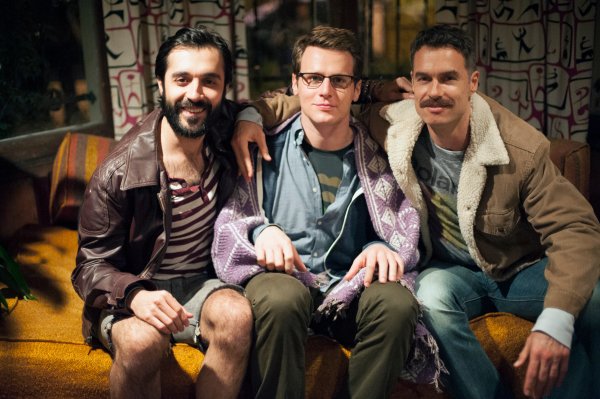 Review of HBO's 'Looking'
Next Up: Editor's Pick