In recent weeks, Television viewers have been unable to escape a certain advertisement for a film. Maybe you know the one: Two stars clutch each other while a voice-over teases the impossible stakes of their improbable romance and Rihanna’s tender “Stay” plays. The camera watches the astonishingly sensual forging of a peach pie from scratch. Then the trailer closes with a release date and six words: “Kate Winslet. Josh Brolin. Labor Day.”

The film is … well, what, exactly? “Snarky and cynical? Bitter and bleak?” Reitman jokes. No, it’s an intimate showcase for three actors (Winslet, Brolin and 15-year-old Gattlin Griffith) who talk less and breathe more than Reitman’s past protagonists, sighing and sobbing during a New England summer weekend spent in the too-close quarters of a rickety old house. The movie offers sharp, careful cinematography, a jagged score and production design that skillfully evokes middle-class life circa 1987 without calling undue attention to itself. And it has a plot that will in all likelihood sound cockamamie: Brolin is an escaped prisoner, Winslet is a solo parent suffering from agoraphobia, and the two quickly fall into something like love. The convict cooks the mother and son dinner, teaches the boy how to hit a baseball and readies the ad hoc family for a border run, all within five days’ time.

“People seem to want one, as a director, to play their favorite song. I never really realized that until I tried playing a different song,” Reitman says. “But I take criticism of this movie, strangely, as a compliment of my other work. Oh, you like that thing I was doing? Don’t worry, I can do more of that.”

The song Reitman has played since the 2005 release of Thank You for Smoking resounds with disillusionment and world-weariness, cackling at the darkness thrumming through modern American life. Sometimes he writes on his own; sometimes he relies on the quirky syncopation of screenwriter Diablo Cody, who wrote Young Adult and won an Oscar for Juno. And he has a stalwart band of other collaborators–from cinematographer Eric Steelberg, whom he met in high school, to the gruff character actor J.K. Simmons, who pitches up his voice for his role in Labor Day–at the ready.

Reitman picks self-evidently ignoble heroes (a top lobbyist for Big Tobacco; a pregnant, wisecracking teen; a professional downsizer, to name just three) and tasks them with winning the audience’s sympathies. That they always do speaks both to Reitman’s capacity for coaxing sterling performances from his actors and to the grimness of the universes his characters inhabit.

This is as he wants it. “Screenplays will come in, offers to direct, on work that could be very good movies,” he says. “But what excites me are the impossible movies. The movies that should not be greenlit.”

He has a lot of those ideas in mind: “Maybe Wolverine gets a job working at a used-car lot and starts dating a girl, and doesn’t know if it’s going anywhere. Probably be more up my alley.” Or a mumblecore Star Wars, fusing sci-fi and the indie genre known for its soft-spoken characters. “It’s Luke Skywalker the first day of Star Wars. He’s on Tatooine and just having a really normal day, and his uncle’s talking to him about the f-cking droids that aren’t working, and maybe he meets a girl, but it kind of goes nowhere. And then the end of mumblecore Star Wars would literally be him getting back to his house and the smoke’s coming off, and Uncle Ben’s dead, and there’s two suns, and he’s like, “Oh, f-ck!” And then the movie ends. Credits.”

Reitman had his eye on the only slightly less undirectable Labor Day in 2009, when Helen Estabrook, his producing partner, brought him the book in galleys. She hoped Maynard’s strong voice would hook him, and it did. He adapted the script and signed Brolin up, and the two got to pitching Winslet. But she had worked too much the previous year and felt burned out. So Reitman went to see her.

“He came to New York and just said, ‘O.K., so why don’t you want to do it?’ That to me was the biggest insight into Jason’s character that I ever got,” Winslet says. “I told him, ‘I need to have this break.’ And he said, ‘Oh, O.K. So when do you want to do it?’ And I said, ‘If you’re really asking me that question and giving me the luxury of being able to tell you my ideal scenario, well, how about a year from now?'” Labor Day started shooting almost exactly one year later.

Reitman knew he would need Winslet’s remarkable talent; the source material demanded it. He says, “The book is brutal. You hear the backstory of these two characters, and it’s brutal. And I was thinking, How do you tell that cinematically and not have the audience running for the doors?”

For one thing, he kept his actors on edge and asked them not to rehearse. Says Winslet: “We literally didn’t know what was going on in Jason’s head, what he was going to ask of us each day and ultimately as characters what was going to happen next.” He kept a tight leash on them, she adds. “He would say, ‘No, I need you to take one step forward, wait two beats and then look at the door.’ I’ve never worked to that degree of specificity in my life.”

Reitman had a personal affinity for Labor Day too. The film is told through the eyes of a boy in middle school in the 1980s who spends much of his time with his mother. Reitman, who has two younger sisters, was frequently the only man in the house during the heady heyday of the Walkman and Teenage Mutant Ninja Turtles. His father, the director Ivan Reitman, spent much of Jason’s youth making blockbusters like Ghostbusters and Kindergarten Cop. The younger Reitman initially had his sights set far from Hollywood and the family business. (His mother and his sister Catherine are both actors.) He started college as a premed student and planned to become a therapist. But then he transferred to USC to study creative writing. One thing led to another, and by age 24, he was adapting Up in the Air and directing TV commercials to pay the bills. By 2009, that movie, his third feature, was out, earning him his second Oscar nomination for Best Director.

But there’s a little bit of the therapist left in Reitman. “When I first meet people, I tend to approach them as if I were a psychologist,” he says. “I try to hit them with a ton of questions, to figure out what they are.”

Reitman and I are in the middle of our interview, but he’s weary after talking up Labor Day. “I’m doing this [interview], I think, to make people go see the movie in the first place. And I’m not sure I’m doing a good job of it.” Besides, when we meet, he’s on set in Austin, thick in the process of shooting Men, Women & Children, an adaptation of Chad Kultgen’s novel starring Adam Sandler and Rosemarie DeWitt. Labor Day is a memory.

So we break for an amateur consultation. He takes down my basic biographical information: age, schooling, employment history. Then he asks me, innocuously, who will win the Super Bowl. I explain, rather discursively, why I like the Carolina Panthers (who would be eliminated four days later). They were surging, stout on defense, the streaking surprise of the regular season, mysterious and intriguing. The Seattle Seahawks had been that kind of team last year, I said, but they no longer had the same flair.

Reitman springs to action: “You just revealed something really interesting about yourself. This is my first note on you. And this is what’s going to make your life difficult. This goes into you being a reporter, a writer, an observer of life. You want people, things, teams to reveal themselves as different than they are … And you’re disappointed when they’re not. And that’s going to be really tough in life. Because people inevitably stop revealing themselves as something different than they are, at some point. And that’s going to bore you. And there are going to be things that you’ll have to stay interested in in life that won’t reveal themselves any further.”

Reitman will allow that his life has changed in recent years. He and his wife divorced in 2011 after nearly seven years of marriage. After making fun of it for a long time, he became obsessive about yoga and dropped nearly 30 lb. (13.5 kg). He has spent three months in Austin working on the new movie and feels at home away from L.A. “I could easily buy a place here and live here,” he says. “I think it’s heavenly.”

But Reitman prefers to perform the therapy himself and from behind the camera. “I used to be focused on comedy and asked for more like laughs from a viewer,” he says. “But now I want, How do I make you feel uncomfortable in a really interesting way? How do I make you feel like you’re looking in the mirror? If I do that right, then I’m pretty happy. It should be a painful experience in a really good way.” 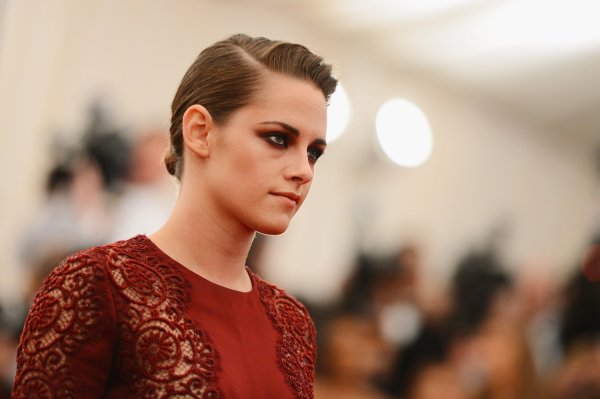 How 1984 Could Be the Next Hunger Games
Next Up: Editor's Pick