It may be the beginning of the end of Super Bowl ads that objectify women. A new preview for GoDaddy’s 2014 Super Bowl ad breaks with the company’s tradition of airing the most sexed up advertisements of the event.

In the teaser for the new spot, race car driver Danica Patrick sports a muscle suit and runs with buff men to a tanning salon that advertised its services on GoDaddy, an Internet domain registrar. Danica Patrick helped launch GoDaddy into relevance with a series of risque ads. (She’s done 13 Super Bowl ads — more than any other celebrity.) Other GoDaddy ad concepts have included strip teases, body paint and make out sessions.

The change in advertising strategy comes after GoDaddy CEO Blake Irving mentioned in a New York Times interview that a contingent of female business owners were pressuring online marketplace Etsy to stop doing business with GoDaddy because their infamous ads objectified women. This year, the company promised no more sleazy Super Bowl commercials. The new ads focus on how female owners can grow their business with GoDaddy.

“We got a lot of attention — we were edgy, funny,” Mr. Irving told the Times. “We were also on the edge of inappropriate.”

But the improvement feels like too little too late. After 10 years of Super Bowl ads featuring scantily clad girls (the first one premiered at the 2005 Super Bowl), GoDaddy has built up a reputation. They don’t need salacious ads for attention anymore; they need to earn the trust of women. Of course putting a talented woman like Patrick in an odd muscle suit that makes her look like a body builder might not be the way to do that, but it’s a start. 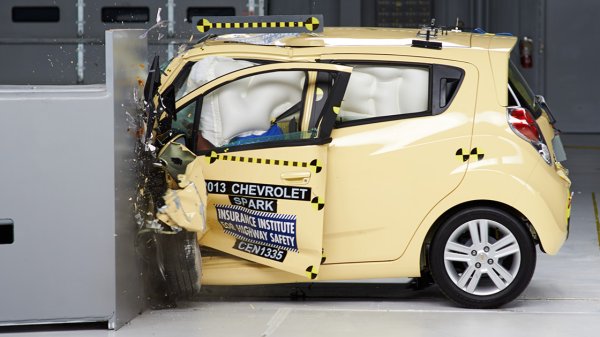 The Terrifying Video That Will Convince You Not to Buy a Small Car
Next Up: Editor's Pick