A deep roster of potential presidential contenders presented competing visions of the Republicans’ future while subtly jostling to position themselves as the right candidate to lead the party.

The Conservative Political Action Conference (CPAC) is a rite of passage for the right’s presidential aspirants, who must showcase their ability to enthrall activists, excite donors and enlist talent. At least five legitimate GOP contenders (sorry, Donald Trump and John Bolton: we’re not buying it) addressed activists in a ballroom at an airy resort here Thursday. In each case, the candidate’s approach to courting the crowd offered an early preview of how he interprets his niche in a crowded field of presidential hopefuls.

“Now, I do have to start with a bit of bad news this morning,” the Texas Senator began his speech, which opened the three-day conference. “I’m sorry to tell you that by virtue of your being here today, tomorrow morning each and every one of you is going to be audited by the IRS.”

It’s a joke Cruz has told time and again, but it brought down the house — and it illustrated how his keen ability to tap into the anxieties of the GOP base makes him a Tea Party darling.

Congressman Paul Ryan, of Wisconsin, waves to the crowd after speaking during the Conservative Political Action Conference at the Gaylord National Resort & Convention Center in National Harbor, Md., March 6, 2014.
Lexey Swall—GRAIN for TIME

Ryan, the Republican vice-presidential nominee in 2012, may not run this time around. But his remarks were a reminder of why he has forged a reputation as one of his party’s brightest thinkers. He likened his successful pitch for entitlement reform to his former boss Jack Kemp’s belief in supply-side economics: an idea considered a political liability until it became party doctrine.

The message? Republicans should embrace the battle of ideas and hold fast to convictions that may not play well at the polls. “A majority party welcomes debate,” Ryan told the crowd. “It brings people in. It doesn’t burn heretics. It wins converts. And it knows people don’t want to be pandered to. They want to be treated like adults. They want to be convinced. They want to be inspired.”

A week after breaking an unwritten rule by lambasting President Obama on the White House grounds, the Louisiana governor flung more red meat than perhaps any other presidential hopeful. Jindal, a Rhodes scholar who has urged the GOP to “stop being the stupid party,” has put his wonky side on the back burner and unleashed scathing attacks on his political opponents. On Thursday he opened his remarks with an apology to former President Jimmy Carter for previously calling him the worst President of his lifetime. Later he said Obama should sue Harvard for his law-school tuition because he didn’t learn anything about the Constitution.

Thursday’s speech reinforced what is almost certain to be a central problem for a potential Christie candidacy: the base’s skepticism in his conservative bona fides.

The young Senator from Florida has distinguished himself by hewing to a muscular foreign policy that has lost favor in a party weary from the costs of war. Rubio, who has been mending ties with the base that frayed after his pitch for immigration reform, unspooled an optimistic speech that hammered Obama’s foreign policy and stressed the U.S.’s central place in the world.

“There is only one nation on earth capable of rallying and bringing together the free people on this planet to stand up to the spread of totalitarianism,” Rubio said, drawing on his biography as the son of Cuban immigrants to lay out his belief in American exceptionalism. “Every time I talk about how special America is, some commentator or whoever it may be will roll their eyes and say, ‘Well, that’s just something Americans tell each other to make themselves feel good.’ You have the right to believe that. I don’t have that option, because I’ve seen it with my own eyes.”

Senator Rand Paul brought down the house in his speech last year and is the odds-on favorite to win this year’s straw poll. Former Senator Rick Santorum finished second to Mitt Romney in the 2012 Republican presidential primary and is flirting with another bid for the White House. Texas Governor Rick Perry is working to resurrect his national brand following a disastrous 2012 campaign. All three will speak to the group on Friday.

Several Republican governors thought to be eyeing potential White House bids all skipped the conference, preferring instead to focus on their re-election campaigns. Wisconsin’s Scott Walker, Ohio’s John Kasich and Michigan’s Rick Snyder all received shout-outs from Christie for their conservative stands but did not travel to the conference. Former Florida Governor Jeb Bush is a favorite of Establishment Republican donors but has shown no real signs of throwing his hat in the ring. 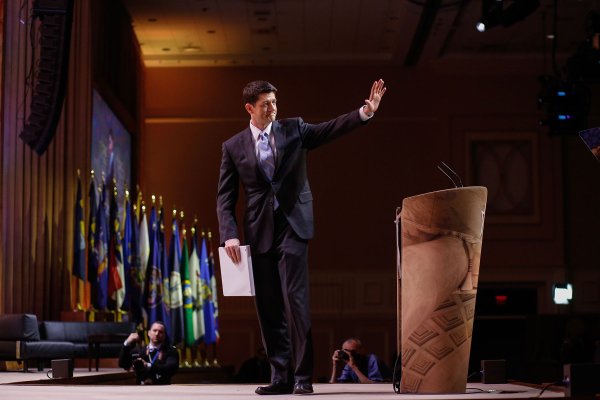