Breaking Breakfast News: Froot Loops Are All the Same Flavor

We hate to be the ones to tell you this, but: you’ve been eating a bowl of lies for breakfast … and you probably liked it.

Turns out that the delicious, multicolored O’s that make up Froot Loops don’t actually represent different fruit flavors. Reddit’s Today I Learned series recently unearthed a 1999 article from the Straight Dope, which confirms that “according to Kellogg’s, all of those delectable loops are flavored the same.”

If you fainted into your cereal bowl after reading that, you’re not alone. We’ve all been misled by those tempting lime green, orange, purple, yellow and red loops into thinking they are lime, orange, grape, lemon and cherry and/or strawberry flavored, when, in fact, they all the same flavor. That flavor? “Froot,” which according to Wikipedia, stems from “a blend of fruit flavors.”

The good folks at Food Beast did some scientific blind testing and found that the rumors are true: Froot Loops all taste the same. In their words: “Each loop does in fact taste like mildly sweetened cardboard, with negligible or no differences between them.” In more shocking breakfast news, they found that blind taste testing of Trix and Fruity Pebbles yielded similar results.

Is nothing sacred? Next thing you know they’ll be telling us that Cap’n Crunch isn’t really a captain. Oh wait. 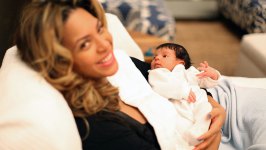 Blue Ivy Pet Sunny Obama and Somehow the World Did Not Implode From Cuteness Overload
Next Up: Editor's Pick