Drummers, worry not: Losing part of your arm in a freak accident doesn’t mean you have to play one-handed like Rick Allen.

If you’re lucky enough to know Georgia Tech professor Gil Weinberg, maybe he’ll rig you up a robotic arm that can wield two drumsticks at once. At least that’s what happened for Jason Barnes, who according to the New York Times, lost part of his arm when he was “jolted by an electric charge while cleaning a restaurant oven” two years ago.

With the prosthesis, Barnes uses his bicep muscle to move one of the sticks. The other stick is automated, monitoring Barnes’ timing and rattling off drum hits in sync with the beat.

You can see how it works in a video that Georgia Tech’s Center for Music Technology posted on YouTube. There’s an undeniably robotic feel to Barnes’ riffs as he solos with a jazz group, but it makes for interesting listening. (And as one YouTube commenter points out, the potential for a genre like drum-and-bass is pretty mind-blowing.)

If you want to see more and live in the Atlanta area, a free concert is scheduled for March 22 at Kennesaw State University. 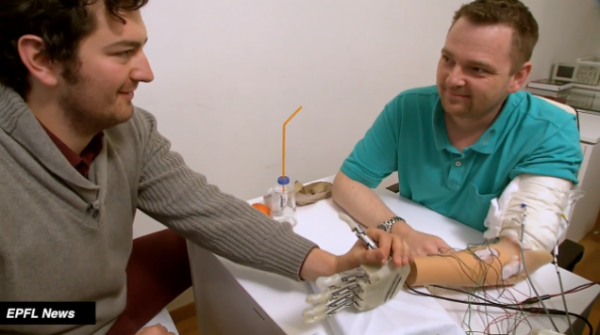