If you’re excited for True Detective‘s finale Sunday, or simply care about good TV in general, there are two pieces you should read today. The first is Kate Aurthur’s long interview with True Detective creator Nic Pizzolatto, which is fascinating on a number of topics, not least for his answer to criticisms of the show’s women characters–and to the question of why said women are so often naked:

The second is Maureen Ryan’s disturbing investigation of how and why the current glory days of cable drama are, by and large, the glory days of white-male storytellers:

Not to pick on HBO exclusively here, since as Ryan writes, it’s not the only prestige-cable network with this diversity problem behind the scenes. (Though it’s especially glaring.) HBO, over the past 15 years, has made many of the best TV shows ever created; that collectively they were almost all made by white guys does not make any one individually any less good.

Nor is it to say, prudishly, that if someone’s getting naked on TV, they’re being exploited. The Sopranos‘ Bada Bing scenes may have been cheesecake, but they also told you what kind of world Tony Soprano lived in. It’s worth noting that the one HBO drama ever created by a woman, 2007’s Tell Me You Love Me, was notoriously the most sexually explicit show HBO had ever made (or has made since, really). But it had to be. It was a show–an underrated one, in my opinion–about how relationships play out through sex, how sex and love, or falling out of love, express and feed off each other.

It was one of the best examples of dramatically necessary, explicit sex on TV. (A potential contender: Masters of Sex, from Michelle Ashford.) Is it coincidence that it was made by a woman? Maybe, maybe not. If there were a few more such dramas created by women, maybe we’d have a better idea. We’d have more perspectives and more distinctive stories, like Jenji Kohan’s Orange Is the New Black.

And it would be easier to make the case for nudity as a dramatically necessary way of representing life if not for quotes like Pizzolatto’s suggesting that cable networks do feel obligated to deliver a Minimum Daily Requirement of Butts. Nor is this the first time that suggestion has come up; in a 2012 interview, a Game of Thrones director described being on set and having an (unnamed) executive producer urge him to deliver the goods: “‘Look, I represent the pervert side of the audience, okay? Everybody else is the serious drama side—I represent the perv side of the audience, and I’m saying I want full frontal nudity in this scene.’ So you go ahead and do it.”

The sad thing about quotes like that is that they play into the most simplistic idea of who pay cable audiences are and what their audiences want. (As Pizzolatto says, does anyone really still pay HBO for T&A when it’s never been easier to get it free?) I’ve said before that the real difference between cable and the old networks is not that cable actors can swear and get naked, it’s that they can tell complex stories and give their audience credit for curiosity and intelligence. It’s harder to make that argument, though, when you hear there’s a “mandate” for nudity, even for creators who say they’d be just as glad with none. It’s harder to defend the numerous excellent scenes in Game of Thrones where sex makes a statement about character and power (as it does in the George R. R. Martin source books), when there are so many other sex scenes that seem to be there, well, because boobs. After a while, you start to sound like the guy who gets Playboy for the articles.

Don’t get me wrong: I can’t wait for the new season of Game of Thrones, or for the finale of the riveting if flawed True Detective. But cable would be better off worrying less about the perv side of the audience. It’s doing just fine already. 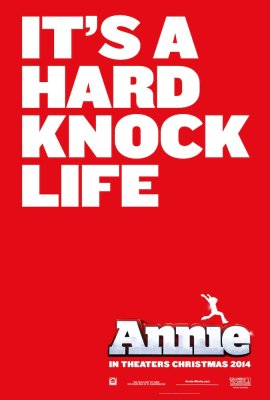 Watch: New Trailer for 'Annie'
Next Up: Editor's Pick