The Hidden Dangers of 'Skinny Fat'

When Elizabeth Chanatry was 16 years old, she was diagnosed with type 2 diabetes. You’d never know it by looking at the 5-foot-3-inch tall, 117-pound 19-year-old, but even Chanatry admits that she’s not as fit as she could be. “My sister and I are not toned, but we are thin,” she says. Chanatry has genetics to thank for her physique, but also for her diabetes—her older sister and father both suffer from the disease too. For as long as she could remember Chanatry drank Diet Coke and asked for sugar-free syrup to avoid too much of the sweet stuff, but when she started to get symptoms for diabetes, she knew it hadn’t been enough.

Obesity is a serious epidemic in the U.S., but the problem, doctors say, is that we are putting too much weight on weight. When the CDC released obesity numbers last week, we cheered that the rate had fallen so drastically for children ages 2 to 5, even though obesity rates overall remained relatively flat. People with stellar metabolisms and magical genes may not look the part, but they can have the same medical issues as an obese person: type 2 diabetes, high blood pressure, high cholesterol, and out-of-control blood sugar. It should be obvious, but a culture obsessed with weight doesn’t always remember that appearances of health can be skin deep.

“I see these people all the time,” says Dr. Daniel Neides, medical director at Cleveland Clinic’s Wellness Institute and Chanatry’s doctor. “On the outside they look incredibly healthy, but on the inside they’re a wreck.” You likely know someone who’s “skinny fat.” They never eat vegetables, love steak, and haven’t exercised since eighth grade gym class—and yet they’re still thin. Perhaps it’s you. But while some of us are envious of our svelte peers who don’t count calories or think twice about having a donut for breakfast, doctors say we shouldn’t be. Skinny fat is a real, and remarkably common, phenomenon—deadly even.

Dr. Neides cites a male patient who, at 46 years old, was a normal weight and what’s generally considered healthy BMI. But when he decided to stop taking his blood pressure medication, he had a stroke that has since left him wheelchair bound.

A 2008 study found that about one-fourth of U.S. adults with normal weight have some form of an unhealthy heart, like high blood pressure or cholesterol. Older adults with normal BMIs (well-known to be an imperfect measurement) but high levels of body fat are at greater risk for cardiovascular disease and death than previously realized, according to a 2013 study published in the American Journal of Cardiology. More recently, a 2014 report on people with “normal weight obesity”—normal BMI, high body fat—found that they have a significantly higher risk of metabolic problems and death from these diseases than any other group.

“When you’re eating a diet high in sugar and processed foods, it causes visceral fat storage, and that can lead to all sorts of risk factors of being overweight,” says Dr. Mark Hyman, author of The Blood Sugar Solution 10-Day Detox Diet. Sometimes a person may not have a lot of fat stored up overall, but what they do have is the most dangerous kind. So a person may not be heavy, but their organs could be coated with visceral fat, whose origins, researchers recently discovered, are genetically different from that of subcutaneous fat. This can cause metabolic syndrome—when someone has several conditions, like high blood pressure and high blood sugar, that put him or her at a high risk for heart disease, diabetes, or stroke.

While the U.S. continues to battle the bulge, many of us are forgetting about the importance of also getting fit. The reaction to a 2012 study that showed that overweight people can be fit goes to the heart of our misunderstanding about fitness. “Everyone got really fixated on the people who were obese but not metabolically sick due to high fitness levels, but what was lost in the message was that we had plenty of people with a BMI below 25 but were unfit and at a high risk,” says Dr. Timothy Church, lead author of the study.

Weight is just one clue doctors look to for an indicator of poor health. But to see what’s really going on, they have to peek under the hood. “The scale is not a proxy for your health,” says Dr. Church, director of the Laboratory of Preventive Medicine at Pennington Biomedical Research Center in Baton Rouge. More research on lifestyle changes is showing remarkable impacts on chronic disease. A 2013 study found that people at a high risk for developing type 2 diabetes could avoid the disease by developing healthier diets, exercising daily, managing stress, and quitting smoking.

It’s another reminder of the importance of the yearly exam, where doctors can screen for measures like high blood pressure and cholesterol and, if something looks off, they can also screen for C-reactive proteins (CRP), which are indicators for inflammation. High inflammation levels account for the majority of diseases that affect Americans.

For her part, Chanatry has no illusions about weight being an indicator of health. “I’ve never associated [diabetes] with obese people because it’s always been a part of my life. I’ll always have it. People look at us and think we’re healthy, but they don’t know.”

Read next: Why Restaurants Should Stop Calling Their Menu Items ‘Skinny’ 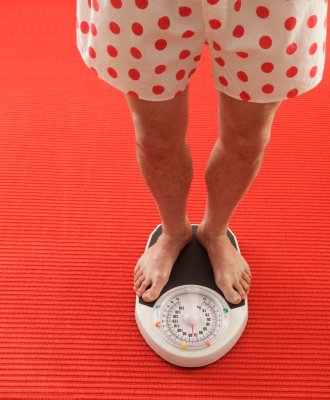 These 10 States Have The Highest Obesity Rates
Next Up: Editor's Pick