Are You There, God? It's Me, Katy Perry

Katy Perry has cemented herself as a feminist’s worst nightmare with her new GQ cover story, in which she reveals that she prayed to God for boobs, that she sings in that whiny voice on purpose, and that she thinks Geishas love unconditionally. Yes, we can all laugh at Perry for praying for her voluptuous figure, but we should be nervous that this influential pop star—that thousands of tweens and teens bop along to—is peddling a childishly sexy persona as feminism.

Katy Perry touted her newest album, Prism, as some sort of feminist awakening. She declared in 2012 that she was “not a feminist” but believed in the strength of women. By 2013, her first post-Russell Brand breakup song, “Roar,” was supposed to declare her independence and communicate that “girl power” mantra that—even if it’s not labeled with the dreaded “f” word—is something close to feminism. Instead, the album dropped, and we got a series of the most obvious sexual metaphors ever.

Spoiler alert: The balloons are her breasts. It seems the veiled metaphors haven’t progressed much since “peacock cock, cock” on Teenage Dream four years ago. This self-acclaimed powerful and independent woman is cultivating that sexy baby image that men love and Liz Lemon/Tina Fey reviled on 30 Rock. Just check out some of the quotes from the GQ article.

On perfecting a sexy whininess:

On her controversial choice to dress up like a Geisha for a performance:

On petulantly yelling at her staff:

And, of course, on her body:

This is what young girls are supposed to aspire to?

Perry proudly proclaims later in the interview, “I never had any plastic surgery. Not a nose, not a chin, not a cheek, not a tit. So my messages of self-empowerment are truly coming from an au naturel product.” It doesn’t occur to her that she’s far from au naturel with her heavy makeup and wigs and airbrushing. And even if she does play down the bright blue wigs and fake eyelashes, many women are still taking trips to plastic surgeons to try to make themselves look more like Perry.

But it’s hard to credit her with any self-awareness when she rounds out the interview with some crazy statements. “I see everything through a spiritual lens,” she said. “I believe in a lot of astrology. I believe in aliens.” She even claimed that she won Wisconsin for President Barack Obama. And of course it ends, appropriately, with Perry declaring as she heads for the stage, “Let’s take it all off!”

Ladies and gentleman, your daughter’s idol. 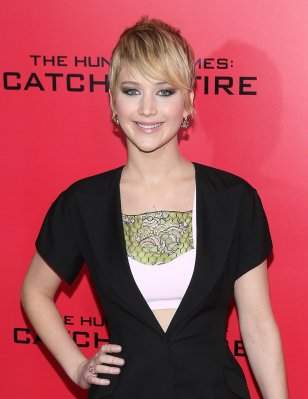 7 Reasons Why 2013 Was Jennifer Lawrence’s Year
Next Up: Editor's Pick