Putin Says Ukraine's Revolutionaries Are Anti-Semites. Is He Right?

An anti-government protester holds a crucifix as he prays at Independence Square in Kiev, Ukraine, Feb. 20, 2014.
Marko Drobnjakovic—AP
By Simon Shuster

In a sense, Russia’s Vladimir Putin is right. A lot of nationalists were involved in last month’s revolution in Ukraine. Some of them now stand to get senior posts in government. A few of them assaulted officials from the old regime, including governors, as the uprising turned violent. All of that has worried the liberal forces in Ukraine as well as their western supporters. But no less troubling for them has been the scare-mongering coming from the Russian President himself. At a press conference on Tuesday, Putin described the revolutionaries in Ukraine as reactionary “anti-Semitic forces” that have gone “on a rampage.” He has gotten a lot of push-back for that.

In an open letter to Putin the following day, some of the leading members of Ukraine’s Jewish community said that “even the most marginal” forces involved in the revolution “do not dare show anti-Semitism or other xenophobic behavior.” That may have been underplaying the risk of xenophobia among Ukraine’s nationalists, and none of the signatories of that letter can claim to represent all of the country’s Jews. But the questions the letter tried to address are crucial ones: Is Russia right to raise the alarm over fascism coming to power in Ukraine? Or is that alarm just an excuse for Russia’s military intervention in Crimea? So far, no one can claim to have the answer, at least because the revolution is too young to have shown all its colors to the world.

What’s clear about the uprising already is that it involved a radical right-wing group called Pravy Sektor (Right Sector), a coalition of militant ultra-nationalists who aim to rid Ukraine of any foreign threat to its independence, from Russia foremost but also from the West. The members of that group are armed, well-trained and prepared to use force to achieve their goals. Their leader, Dmitro Yarosh, has been offered senior posts in Ukraine’s security services, and this week, his organization threatened to take the war to Moscow if Putin continues his occupation of Crimea in the south of Ukraine. On Wednesday, Russia responded by putting Yarosh on an international wanted list on charges of inciting terrorism.

For years, Yarosh has been open in his hatred for the Russian state, which he has called the “centuries-old enemy of Ukraine.” But when TIME asked him last month to respond to claims of anti-Semitism, he was adamant that his organization has no grudge whatsoever against Jews. “Many Jews have fought and died for the cause of Ukrainian nationalism,” he says. “I see those men as heroes of Ukraine. So what kind of anti-Semite does that make me?”

Pravy Sektor, he explained, does not divide people along ethnic or religious lines. “We divide people into three categories,” he says. “The first belong to the brotherly communities that fight with us for our ideals, regardless of their nationality. The second are the ethnic minorities who respect the right of Ukrainian people to be the rulers of our own land, and as a result we are tolerant of them and their religion. The third category is made up of the people who threaten our national rights to have an independent Ukrainian nation.” The latter group, regardless of their ethnic background, are the enemies of Pravy Sektor.

So far, at least part of the Jewish community of Ukraine does not feel at risk of falling into that third group. In their letter to Putin, its nearly two dozen signatories, including two prominent rabbis, said that they do not need Russia’s protection. “Your certainty of the growth of anti-Semitism in Ukraine also does not correspond to the actual facts,” they wrote to Putin. “It seems you have confused Ukraine with Russia, where Jewish organizations have noticed growth in anti-Semitic tendencies last year.”

Indeed, some of the most vicious anti-Semitism in Ukraine can be found among its pro-Russian crusaders. In 2011, TIME interviewed several leaders of the Russian Cossack community in Crimea, which has demanded for years that Russia annex the Crimean peninsula. One of them, Vitali Khramov, is a Russian citizen and the leader of a far-right group called Sobol, which trained separatist paramilitaries in Crimea for years before Kharmov was deported from Ukraine in 2012.

Throughout the four-hour interview that summer in the Crimean city of Feodosia, Khramov referred to Jews as “corpse f—kers,” claiming that ritual necrophilia is a rite of passage for young Jewish men. The greatest threat to the world, he went on, is the Jewish cabal led by the bankers of the Rockefeller family, who he said rule the world and seek to “bring Russia to its knees.” President Putin, on the other hand, was Khramov’s political hero, he said, and a future saint of the Russian Orthodox Church.

By those standards of right-wing anti-Semitism, Yarosh doesn’t seem like much of a fascist. His ideological roots trace back to the nationalists who were most active in Ukraine during World War II. Their leader — and Yarosh’s idol — was Stepan Bandera, who died in Germany in 1959 but remains one of the most divisive figures in his homeland today. A crucial litmus test for any political group in modern Ukraine is its attitude toward Bandera. Roughly half the country, primarily in the Russian-speaking regions of eastern Ukraine and Crimea, regards him as a fascist and a Nazi collaborator. The other half, primarily in western and central Ukraine, see him as a national hero and a founding father of Ukrainian independence.

Both points of view have a basis in fact, and both have been championed by recent Ukrainian leaders. In 2010, President Viktor Yushchenko, who came to power after the 2004 Orange Revolution, awarded Bandera the posthumous title of Hero of Ukraine for “defending national ideas and battling for an independent Ukrainian state.” That was one of the final and most controversial acts of Yushchenko’s presidency. His successor, Viktor Yanukovych, revoked that honor the following year, months after coming to power. But the revolutionary leaders who overthrew Yanukovych last month have signaled that they will return to a policy of reverence for Bandera’s legacy.

Across Ukraine, that legacy is so hotly disputed that any attempt to classify it is almost sure to enrage a sizable part of the country. Most of the rancor derives from differing takes on the history World War II. But here are the widely acknowledged facts.

In June 1941, the Nazi invasion of Ukraine sent the Soviet army fleeing eastward, and Bandera’s Organization of Ukrainian Nationalists used that as its chance to declare independence from the Soviet Union, as it had long sought to do. Bandera was a single-minded opportunist, obsessed with throwing off Russian rule and making Ukrainians the masters on their historical homeland.

He didn’t seem to care who he had to partner with and who he had to kill to accomplish that. So he collaborated with the Nazis for years, receiving pay from Hitler’s forces to stage attacks on Soviet soil, and then fought against the Nazis after their invasion of Ukraine, when he realized the threat they posed to his country’s independence. For that, he was imprisoned for three years in the Sachsenhausen concentration camp.

Only in the final year of the war, when the Nazis again needed his help to fight the advancing Soviet army, was Bandera released. And once again, he collaborated with the Germans, staging sabotage attacks against the Soviets as they pushed Hitler’s forces back toward Berlin. During the war, Bandera’s men are known to have participated in pogroms against Jews, and the leaders of his organization called for the eviction and slaughter of Jews and other ethnic groups, primarily Poles and Russians, who they felt were a threat to Ukrainian nationalism and independence.

But, as Yarosh insists, Bandera’s paramilitary forces included fighters from various ethnic groups, including Jews. “There were entire Jewish battalions fighting for the cause of independence,” he says. “They were our brothers.” Of course, Yarosh may have been posing for the benefit of a Jewish-American reporter. But he made no secret of his admiration for Bandera throughout his interview with TIME. He calls Bandera’s forces the “predecessors” of Pravy Sektor, adding that, “We are their followers and must continue their struggle.”

In Russia and much of Ukraine, such statements cause an understandable degree of horror. Bandera’s betrayal of the Soviet Union and longstanding collaboration with the Nazis made him one of the most despised figures in Soviet history. He has been denounced by Russian historians as a fascist and a war criminal. So it is no surprise that Yarosh, his professed admirer, has of late become the bogeyman on Russian state TV. Indeed, when the Crimean legislature voted on Thursday to be annexed by the Russian Federation, and called a referendum in Crimea to approve or reject that decision, its leaders cited Bandera’s followers as the reason for their turn toward Moscow. “We are certain that our Russian brothers will not leave Crimea to face these raging Bandera groups all alone,” said the deputy prime minister of Crimea, Rustam Temirgaliev.

In their letter to Putin on Wednesday, the Jewish community leaders tried to play down these fears. Pro-Russian forces, they wrote, “have tried to scare us (and are continuing their attempts) with ‘Bandera followers’ and ‘Fascists’ attempting to wrest away the helm of Ukrainian society, with imminent Jewish pogroms. Yes, we are well aware that the political opposition and the forces of social protests who have secured changes for the better are made up of different groups.” Nevertheless, the letter said, “we live in a democratic country and can afford a difference of opinion.”

Much like Putin in his remarks the previous day, the letter did not mention Pravy Sektor, nor did it bring up the role of the nationalist Svoboda (Freedom) party in last month’s revolution. The leader of that party, Oleh Tyahnibok, has made anti-Semitic remarks in the past. Most recently in 2007, when he was still a marginal firebrand in parliament, he said that “yids” working in league with the “Russian mafia” were responsible for most of Ukraine’s problems. Similar remarks in 2004 got him expelled from the more centrist party Our Ukraine, but eight years later, he went on to take about 7% of the seats in Ukraine’s parliament as leader of the Svoboda party.

During this year’s revolution, Tyahnibok was one of the opposition leaders involved in talks with the Yanukovych regime and with U.S. and European diplomats. In January, his party organized a march to mark the 105th anniversary of Bandera’s birth, and some politicians from the pro-Western Fatherland party also took part. That party now holds the interim presidency of Ukraine as well as the premiership. But its leaders have never made any anti-Semitic comments in public, and they have pledged to guarantee the rights of all of Ukraine’s ethnic minorities. So it remains unclear where Putin saw anti-Semites going on a rampage. Then again, the conflict in Ukraine seems to have given him selective vision. Although the forces occupying Crimea use Russian license plates and have admitted to being Russian troops, Putin still refuses to say whether the Russian military has come to Crimea to protect against the alleged fascist threat. 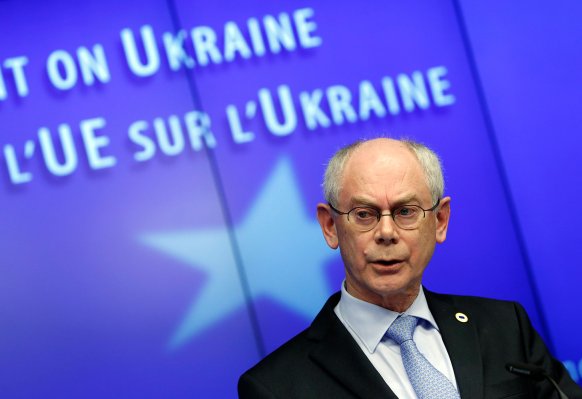