Pharrell Says It's 'Not Possible' For Him to Be a Feminist

Singer Pharrell Williams poses during the opening of the exhibition "GIRL", with Pharrell Williams as its curator, at the Galerie Perrotin in Paris, May 26, 2014.
Christian Hartmann—Reuters
By Eliana Dockterman

Grammy winning singer-songwriter Pharrell Williams—who has skyrocketed to superstardom in the past year with the songs “Blurred Lines,” “Get Lucky” and “Happy”—addressed the debate over last year’s controversial “Blurred Lines,” which many feminists have called “kind of rapey.”

The subject came up when Pharrell began speaking about his views on feminism during the interview with the United Kingdom’s Channel 4 News. Pharrell has spoken before about his love for women and his belief in equality between the genders. His most recent album is called GIRL after all. And yet Pharrell apparently does not consider himself a feminsit:

Don’t worry, male feminists—and yes we know you do exist (hello, Joseph Gordon-Levitt)—Pharrell wants to vote for Hillary Clinton in 2016:

…Like when men tell women, “I know you want it”?

That line from “Blurred Lines,” Pharrell’s smash hit collaboration with Robin Thicke and T.I., is one of several lyrics in the song that have caused many to criticize it as “rapey“, a problem compounded by the accompanying music video which features naked women prancing around fully-clothed male singers.

Pharrell is far from the first celebrity to avoid the term “feminist,” despite supporting women’s equality. Shailene Woodley and Kelly Clarkson have all told TIME they are definitively not feminists. They’re joined by Carrie Underwood and Katy Perry among the celebs who will not use the term. But none of those people have ever written a lyric that reads “I know you want it.”

When Channel 4’s interviewer, Krishnan Guru-Murthy, cross-examined Pharrell on some of the more misogynistic lines in the song, the artist said:

Guru-Murthy argued that the song—which talks about how a man wants to have sex with a woman despite the fact that she’s with another man—is not the same context as purchasing a car, to which Pharrell said:

Next, Guru-Murthy pressed him on the music video, in which three topless women dance around the fully-clothed male singers. The interviewer suggested that this created a power dynamic in which the women were only there as objects to please the singers:

Finally, Guru-Murthy asks him about another line in the song, which according to Pharrell was written by T.I.: “I’ll give you something big enough to tear your ass in two.” Does that line make Pharrell uncomfortable? 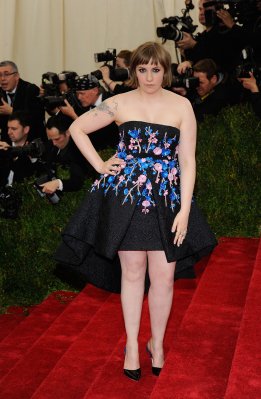 Lena Dunham and Her Sister Add to #YesAllWomen Discussion
Next Up: Editor's Pick