It’s easy to get fed up when you’re trying to save the world. Progress can be slow, setbacks are constant and few people appreciate exactly what you’re doing. Bill Gates understands that better than most. Having spent the past 13 years battling poverty, hunger and disease around the world through the Bill & Melinda Gates Foundation, he has a right good record of success to point to, but public misconceptions persist.

In their 2014 annual letter, both Bill and Melinda Gates take on what they call the three great global-aid myths: that poor countries will always be poor; that foreign aid is a waste, with money inevitably vanishing into the pockets of corrupt officials or being misspent by inept bureaucracies; and that saving lives in the developing world will only lead to overpopulation.

The myths persist despite the fact that Africa is experiencing something of a boom time. Demographers document a paradoxical reduction in population in countries where child mortality goes down. As families can be more confident their babies will survive, they will have fewer of them. And as for corruption: yes, it exists, but the incidence has plummeted — thanks in part to the results-based way the Gates Foundation and others administer their programs — and try to name a country in the world that doesn’t have at least a few corrupt officials.

“Four of the past seven governors of Illinois have gone to prison for corruption,” Bill Gates wrote in his letter, “and to my knowledge, no one has demanded that Illinois schools be shut down or its highways be closed.”

Gates elaborated on these and other ideas in a conversation with TIME this morning. As his answers show, he remains both optimist and realist.

You seem hopeful about our ability to lift nations out of poverty permanently. That’s an awfully bold position given how intractable the problem has always been. What evidence do you have that we’re winning the war?
Look at the numbers. If you go back to 1800, everybody was poor. I mean everybody. The Industrial Revolution kicked in and a lot of countries benefited, but by no means everyone. Even in the 1950s and 1960s, most countries were very poor. India, China, Africa, everyone but the West was living on less than $2 a day per capita. But the curve is shifting and incomes are rising and now most of those countries have $5- to $10-a-day-type incomes. That doesn’t sound like much, but it’s per person not per family and the key thing is purchasing power, which can be quite high on $10 per day in a country in which things cost much less. Living on $6 a day means you have a refrigerator, a TV, a cell phone, your children can go to school. That’s not possible on $1 a day.

How does the kind of global aid the Gates Foundation often provides — vaccine development and delivery, say — help countries get richer?
When you invent the vaccines that make kids healthy, you remove a burden from the countries’ health care and social systems. Aid creates health and nutrition, and health and nutrition creates wealth. Healthy children can go to school and work and contribute to their country’s economy. Yes, it’s hard to see the benefits right away and that often misleads people. Health improvements pay off a generation down the line.

(MORE: Why the London Vaccine Summit Is a Triumph for Global Health)

What about the dependency issue? Don’t recipient countries come to rely on aid?
Mexico was once a recipient country. So was Brazil and so was China and now they’re all donor countries. The key is the kind of aid you provide. When you invent seeds that produce heartier crops in diverse climates, you help farmers become more productive, for example, and that has perhaps the biggest impact on a developing country. Clearly, having stability, having a capitalist economy helps too. China adopted a capitalist system in the 1980s, and they went from a 60% poverty rate to 10%.

No one ever advocated simply letting countries with high infant-mortality rates suffer, but most did believe that reducing deaths would mean exacerbating overpopulation. Now we’re finding the opposite is true. How did that happen?
Actually demographers were seeing drops in population rates as kids stopped dying some time ago. The people who did population projections went year after year tracking this, and by the 1990s this idea was pretty well-known but only in certain circles. It was only recently, as we started working with contraception, that I understood it myself. Families in wealthier, healthier countries have fewer children because the odds are better that the ones they have will survive infancy. Vietnam and Costa Rica really got their act together in this regard and built primary-health-care systems, which reduced mortality. More recently, Ethiopia and Rwanda have been doing the same. The Rwandan Health Minister put together 15,000 health centers staffed by two women each. Ghana, relative to its income, runs a pretty good health system, while Nigeria runs a poor one relative to its wealth. There’s quite a bit of variance in Africa.

Still, you say you’re optimistic about Africa overall.
Over the past half-decade, 7 out of the world’s 10 fastest-growing economies are in Africa. By the 1990s, life span had doubled in Africa and child mortality has dropped by a third compared to just a few years ago. Globalization has made copper and other minerals more valuable, and Ghana and Kenya have recently discovered mineral resources. The question is, Does the wealth that’s generated get used the right way to fund infrastructure and schools? African nations are still poorer than us, yes. But improvements in the human condition have laid the foundation for improvements in their entire societies.

PHOTOS: The Global Reach of the Gates Foundation 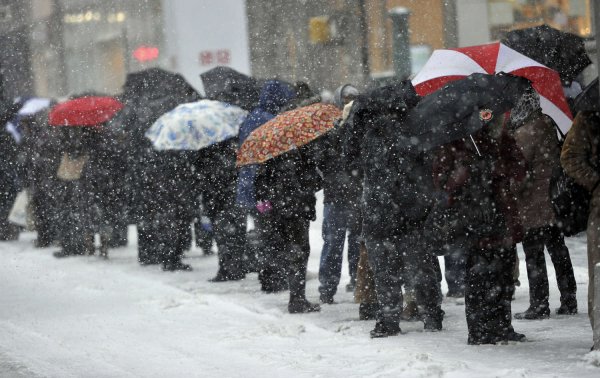 Snowpocalypse or Not, 2013 Was One of the Warmest Years on Record
Next Up: Editor's Pick