Ukrainian presidential candidate and businessman Petro Poroshenko briefs the media after a meeting with Germany's Christian Union's faction law makers in Berlin on May 7, 2014.
Markus Schreiber—AP
By Simon Shuster

Early in his campaign to become Ukraine’s President, Petro Poroshenko promised to sell off his business empire to concentrate on the task of governing. Among the first to go for Poroshenko, the billionaire who was elected last weekend, will be his mammoth confectionary company Roshen, which earned him the bulk of his fortune—as well as his nickname, The Chocolate King. But to the frustration of many supporters in Ukraine and in the West, he has refused to sell his most prized asset: the television news network Channel 5.

Although former staffers there say he never interfered in editorial policy, media watchdogs have grown concerned about possible conflicts of interest. “If Mr. Poroshenko intends to sell his assets, in my view, his TV station should be the first to go,” says Dunja Mijatovic, the top official for media freedom at the Organization for Security and Cooperation in Europe, or OSCE, an intergovernmental body that monitors censorship, elections, human rights and conflicts around the world. “It is my firm view that elected politicians should not own and control media outlets in their country, be it Ukraine, Italy or any other, so as not to use and abuse them to serve their political goals,” she added in a statement to TIME.

At a news conference marking his election victory on Monday, Poroshenko addressed the issue of his business holdings, which have been a sticking point in his campaign from the beginning. The regime of his predecessor, Viktor Yanukovych, was overthrown in February partly because of the fortunes his family amassed while in office. Poroshenko pledged Monday to break from that practice and “lay a new tradition” in Ukrainian politics, one that would ensure a leader “gets rid of his business, sells it and concentrates all of his energy, all of his time on serving the people.”

But in the same breath, Poroshenko said Channel 5 would not be sold. Asked to explain this decision, he said: “First of all, it’s because Channel 5 has never been sold and will not be sold.” Its coverage of both of Ukraine’s post-Soviet uprisings—the Orange Revolution in 2004 and the Maidan revolt that toppled Yanukovych this winter—has been “exceptionally important,” Poroshenko added. “Sometimes Channel 5 criticizes me even more harshly than anyone else.”

Many in Ukraine would dispute that, not least of all the pro-Russian separatists who have taken control of large parts of the country’s eastern regions. Some of the fiercest battles the rebels have waged against Ukrainian police and security forces have been over control of local television towers. Their aim in seizing these massive antennas has been to beam in Russian state TV, which Ukraine has tried to block from the airwaves as a source of Russian disinformation and propaganda. The scramble to claim these broadcast frequencies has amounted to a war for hearts and minds.

Yet in many cases, the rebels have allowed some Ukrainian networks to stay on the air in the parts of Donetsk they control. “Let the people compare,” says Pavel Mikhalev, the main broadcast engineer for the separatist forces in that region. (Apart from manning the TV tower control rooms, he also runs a rebel radio station on the frequency 90.5 FM.) “Let the people use their heads and see who’s telling the truth,” he tells TIME. But his tolerance for Ukrainian coverage of the conflict does not extend to Channel 5, which he took off the air as soon as his comrades seized the Donetsk TV headquarters in late April. “That’s because they’re intolerable,” he says of Poroshenko’s channel. “They’re just bald-faced liars.”

This aversion to the network’s coverage is, at least in part, rooted in historical associations. Channel 5 emerged as one of the most popular news sources in the country a decade ago, when it threw its support behind the pro-Western leaders of the Orange Revolution of 2004. The channel was only a couple years old at the time, “full of young crazy people with very little TV experience,” says one of its first senior editors, who spoke on condition of anonymity. “When that revolution broke out, we went into a non-stop marathon mode, round the clock coverage. We became the mouthpiece of the Orange cause.”

Poroshenko, who was then a member of parliament, entered into an alliance at the time with the leader of the Orange Revolution, Viktor Yushchenko, who went on to become Ukraine’s President in 2005. Poroshenko then served in top posts during Yushchenko’s tenure, including stints as Foreign Minister and chairman of the central bank. Under the presidency of Yanukovych, who was elected in 2010, Poroshenko also briefly served as Minister of Trade and Economic Development. All the while, he maintained ownership of his businesses, including the chocolate factories and Channel 5.

Like Poroshenko himself, the channel’s coverage has always been staunchly in favor of Ukraine’s integration with the West—a position that earned it the ire of millions of people in eastern and southern Ukraine, where people tend to favor closer ties with Russia. For the past decade, viewers in these regions have had the option of simply changing the channel, tuning into one of the Russian news networks that were accessible across Ukraine instead. But in March, when the Russian military occupied Ukraine’s Crimean peninsula, the interim government in Kiev banned the transmission of all Russian channels as a threat to national security.

Poroshenko has been a firm supporter of this policy from its inception, arguing that Russian propaganda is at the root of the separatist rebellions in the regions of Donetsk and Luhansk. During a television appearance on May 12, he even demanded that the Ukrainian security services take more drastic measures to keep local TV towers out of separatist control. “Rig them with explosives if you have to,” Poroshenko said. “No matter what, we cannot allow this poisonous Russian propaganda across all of Donetsk and Luhansk. That is what creates big problems.”

Though extreme, this approach to information policy was not Poroshenko’s invention. Taking its lessons from Ukraine’s experience with separatist rebels, the Central Asian dictatorship of Uzbekistan, which is also home to a large population of ethnic Russians, reportedly ordered all TV and radio towers to be rigged with explosives last month.

But while Uzbekistan is an autocratic hermit state, Ukraine is a pluralistic democracy with the aim of joining the European Union, so its policy of banning foreign TV channels has already raised concerns about media freedom. Mijatovic, the journalism watchdog at the OSCE, criticized the practice in a 14-page report on media freedom in Ukraine on May 23. “No matter how loud and outrageous certain voices are, they will not prevail in a competitive and vibrant marketplace of ideas,” she wrote. “Therefore, any potentially problematic speech should be countered with arguments and more speech, rather than engaging in censorship.”

Prominent Ukrainian journalists have also spoken out against what they perceive to be the erosion of journalistic standards, particularly at Channel 5. During the election campaign, the network gave its owner abundant air time while skimping on coverage of his rivals, wrote Sergiy Leshchenko, one of Ukraine’s top investigative reporters, in a recent piece of media criticism. “Of course Poroshenko, as the boss, can use his property however he sees fit,” he wrote. But then he cannot claim to be any different from Ukraine’s other oligarchs, “who see the media as an instrument of political battle,” Leshchenko added.

The rebuke seems unfair to some of Poroshenko’s former employees, who note that within two years of creating the channel, he signed an agreement with the editorial staff banning him from exerting any influence on its coverage. “We never felt any interference, at least while I was there,” says the former editor, who worked at the channel throughout the Orange Revolution.

These days, the supporters of that revolution, primarily the younger, more progressive voters of western and central Ukraine, form the core of Poroshenko’s electorate. “And don’t forget, this is also the main audience of Channel 5,” says Taras Berezovets, a political consultant in Kiev. “Owning that channel allows him to maintain the connection with his base.” Yet as Berezovets points out, there has never been a President in Ukraine’s history who directly owned a major media outlet, let alone one of the country’s most popular TV channels. “But this is his favorite toy,” Berezovets says. “And if he ever does agree to sell it—which I doubt—it will be the last thing he ever sells.” 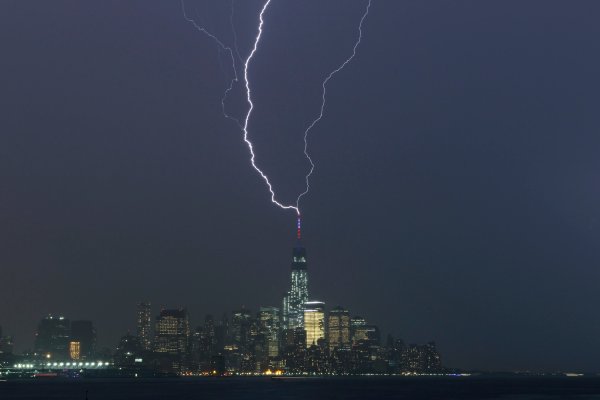