REVIEW: Maleficent: Sympathy for the Rebel

This one had all the makings: a famed Disney villainess played by Hollywood’s’ most infernally glamorous star; a script by the screenwriter of Disney’s Beauty and the Beast, The Lion King and the Tim Burton Alice in Wonderland; direction by the Oscar-winning production designer of Avatar — all in the service of reimagining a beloved fairy tale with a true-love twist. What could possibly go wrong?

Nearly everything, in Maleficent, a revisionist “origins story” of the sorceress in Disney’s 1959 animated feature Sleeping Beauty. Except for Angelina Jolie, exemplary as the fairy badmother who laid a narcotic curse on an infant princess, this pricey live-action drama is a dismaying botch. Robert Stromberg, the expert draftsman in his debut as director, has no mastery of casting and guiding actors, little sense of narrative pace or build and — the big, sad surprise — a leaden sense of visualizing Maleficent’s fairyland. Full of spells and transformations, the movie couldn’t be less magical.

Borrowing from the novel and Broadway musical Wicked, which gave a redemptive backstory to The Wizard of Oz’s Witch of the West, scriptwriter Linda Woolverton argues that the young Maleficent (Isobelle Molloy as a child, Ella Purnell as a teen) was a sweet, grave girl — an elfin aristocrat who, in other circumstances, might have grown up to be a wise queen like Galadriel in The Lord of the Rings. But instead of Aragorn she met the human Stefan (Michael Higgins as a boy, Jackson Bews as a teen and Sharlto Copley as an adult). This dashing lad won Maleficent’s love and, ambition overwhelming ardor, clipped and stole her wings to become the king of a neighboring realm. Bastard!

To revenge herself on the man who unleashed her Wicked side, Maleficent barges into the christening of King Stefan’s daughter Aurora and proclaims her famous curse: that on the girl’s 16th birthday she will prick her finger on a sewing-wheel needle and fall into a coma, breakable only by “true love’s kiss.” The King sends the infant into the Witness Protection program of three nattering fairies (Isabelle Staunton, Lesley Manville and Juno Temple) whose cottage is monitored by Maleficent’s shape-shifting servant Diaval (Sam Riley).

(SEE: 13 Disney Princesses and the Actresses Who Voiced Them)

At first Maleficent thinks the baby is “so ugly you could almost feel sorry for it.” But over the years in the forest, Aurora grows into a lovely teen (Elle Fanning) who calls Maleficent her fairy godmother. She just might steal — as the woman who cursed her says — “what was left of my heart.” Cared for by three fairies who are, at best, dotty aunts, a girl alone needs a mother figure, and finds it in Maleficent. (Aurora at five is played by the star’s daughter Vivienne Jolie-Pitt.) The warmth she can provide is chilled by the knowledge that she is the one who, long ago, doomed her one loving alliance.

Producer Joe Roth — who also shepherded the live-action versions of Alice in Wonderland and Oz the Great and Powerful through Disney, and Snow White and the Huntsman at Universal — rightly recognized Jolie’s kinship to Maleficent, declaring that “There was no point in making the movie if it wasn’t her.” He was alluding to the star’s dominant, regal otherness.

She almost might have been designed in some special-effects shop to play Maleficent. And Rick Baker’s makeup artistry does her and the character proud, with curling, leathery horns and dark diagonal slashes on her cheekbones that sculpt her face into diamond-shaped severity. To the wolf eyes and Morticia Addams pallor, Jolie brings an imperious vocal styling with echoes of Bette Davis. (Eleanor Audley voiced Maleficent in the animated feature.) She is the visual, aural and behavioral embodiment of an otherworldly goddess capable of anything, from poisonous curses to surrogate-mother love.

(READ: The sorry state of mothers in Disney animated features)

Other than Jolie’s grandeur, and a bit of Fanning’s freshness, the movie’s got nothing. It takes its design cue from sword-and-sorcery films in their sepulchral early-’80s phase (The Dark Crystal, Legend) but fails at its evocation of enveloping murk. When it tries for lightness of image, with the appearances of fairyland sprites, the creatures are wan, unbeguiling and poorly integrated into the surrounding flora. Lightness of touch is also missing; Maleficent didn’t have to go the parody route of The Princess Bride (which also had a full measure of enchantment), but a little knowing levity would have given the characters life outside of their stereotypes.

Roth and Disney knew their project had problems; they enlisted John Lee Hancock, director of The Blind Side and Saving Mr. Banks, to rework the early scenes and add a ton of narration (voiced by Janet McTeer). Apparently no one could fix the clumsy comedy of the fairy trio, or the minimal impact on Aurora of two royal deaths, and least of all the unfortunate casting of Copley. The South African actor, so comically poignant as the lead in Neil Blomkamp’s District 9 (his first feature role), lacks the traditional skills needed for a fairy-tale hero turned villain. Nor did anyone attend to anomalies in Maleficent’s powers. She can change Diaval into any creature, from crow to dragon, except when, toward the end, she can’t. Her imposing wings get sawed off, until they get magically and capriciously reattached.

The Disney people ought to know how to tell this story — of a female with frightening powers, finally battling to save the princess who suffers from her curse — because they just did it. Anyone remember Frozen? That animated wonder had the forces of good and evil at war in the same character, plus a love story, smart laughs and a hit song that ran through everyone’s internal iPod for months.

(READ: Why Frozen Was Totally Thaw-some)

Maleficent ends with Lana Del Ray singing the original film’s “Once Upon a Dream” (based on Tchaikovsky’s Sleeping Beauty waltz) in a droning tone that suits this production. It’s a requiem, a dirge, for a lifeless movie. 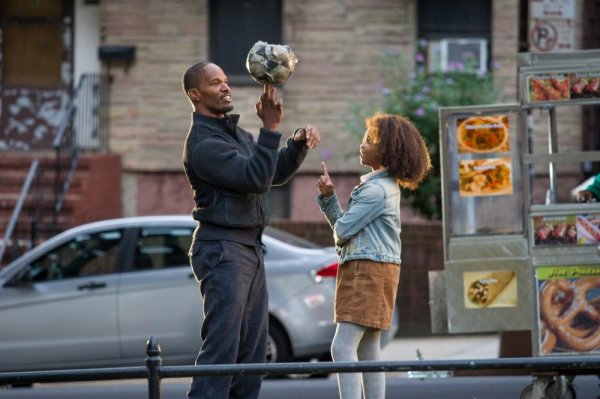 Watch the New Annie Trailer—With a New Lyric in 'It's the Hard-Knock Life'
Next Up: Editor's Pick