Meet TwoDots, the sequel to Dots, one of the biggest mobile games of 2013. Developer Betaworks just released the game for iOS Thursday and says an Android version should follow later this year. It’s available now for free (with optional in-game purchases) from Apple’s App Store.

The original Dots, subtitled “a game about connecting” and released a little over a year ago, was about lining up two or more same-colored circles at 90-degree angles. The parameters were simple: you couldn’t do diagonals, if you scored four-in-a-row all dots of the same color on the screen vanished, you could use power-ups to remove certain dots or extend the clock, and that clock lasted 60 seconds per round. It was neat and pretty and pastel and in view of iOS 7’s clean-lined, polychromatic vibe, the kind of game you’d expect someone like Apple’s Jonathan Ive to design.

TwoDots, which makes me think of that lyric in the Peter Gabriel song “Growing Up,” where he’s singing his way through abstract levels of existence, is apparently like and not like Dots. “Join two brave dots as they traverse arctic tundras, navigate fiery jungles, and plunge the ocean depths. Sharpen your skills across 85 challenging levels while uncovering many exciting new features along the way,” reads the pitch on the App Store.

Wait a second, is this Dots or Temple Run?

“The TwoDots gameplay looks much more derivative of Dots then it actually is,” says Patrick Moberg, one of the first game’s creators. “As you dig deeper, you realize TwoDots simply tips their hat to our first game Dots, but quickly takes the player down a very different and fun path.”

So there you go, now it’s a mystery game, too — just the sort of lure the company needs to entice its base. And that base sounds massive: the first game is still played more than 500 million times per month, says Betaworks. 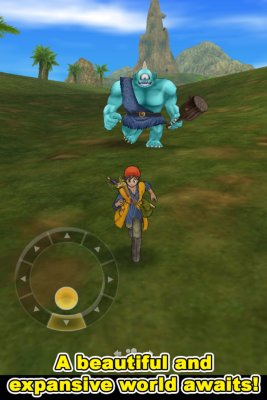 Dragon Quest 8 Is Now Playable on an iPhone, iPad or Android Device
Next Up: Editor's Pick