President Barack Obama again declined to provide an overarching theme to his foreign policy strategy in an interview with NPR broadcast Thursday, a day after his address at West Point defending his approach to matters abroad.

“I’m not sure I can do it in a sentence because we’re fortunate in many ways,” Obama told NPR in an interview conducted after his speech. “Instead, what we have is, as I say in the speech, this moment in which we are incredibly fortunate to have a strong economy that is getting stronger, no military peer that threatens us, no nation-state that anytime soon intends to go to war with us.”

Obama’s speech on Wednesday disappointed critics who expected to hear about stronger action and something of an Obama Doctrine. Instead, Obama warned against rash military actions while announcing additional financing for combatting extremists groups in the Middle East and Africa, while also pledging to “step up” support for Syrian rebels.

In his interview with NPR, Obama said his primary foreign policy goals included closing the American detention center at Guantanamo, an early campaign pledge that has since stalled, as well as better defining the framework for using drones.

Obama stood by his foreign policy thus far, crediting his soft power response to the crisis in Ukraine with helping to de-escalate tension in the region. The president also defended his proposal to boost support for Syria’s rebels even at a time when Syrian President Bashar Assad appears to be solidifying his position.

“I wouldn’t say that conditions are better. I think in many ways, the conditions are worse. But the capacity of some of the opposition is better than it was before,” he said.

The President again advocated for the use of diplomatic tools instead of involving the U.S. in large-scale military operations.

“American leadership in the twenty-first century is going to involve our capacity to build international institutions, coalitions that can act effectively, and the promotion of norms, rules, laws, ideals and values that create greater prosperity and peace, not just in our own borders, but outside as well.”

Most Popular on TIME
1
The Disastrous Swedish Approach to Fighting COVID-19
2
U.S. Swing States Revealed a Nation Plagued by Misinformation
3
The True Story of the Trial of the Chicago 7 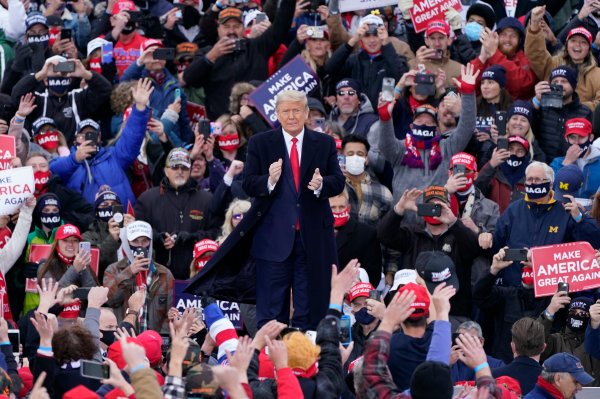 Trump Leans Into Fear Tactics to Win Midwest
Next Up: Editor's Pick