Shailene Woodley was so passionate about John Green’s love story that she offered to work as a caterer on the set of the movie if she didn’t get the role of Hazel. She needn’t have worried. The 22-year-old brought both Green and the director to tears during her audition. Off set, Woodley is as famous for her eccentric beliefs as she is for her exceptional talent: she’s a proponent of a hunter-gatherer lifestyle that involves eating clay, sunning herself between her legs and not owning a cell phone. Woodley sat down with TIME to talk about what makes a healthy partnership, the afterlife and why she’s not a feminist.

What jumped out at you about the script for The Fault in Our Stars?

Do you think that teenagers can fall in love in the same way that adults can?

Absolutely. I think age is one of the hamartias [a flaw likely to lead to a downfall] of modern-day society. When people criticize people for dating someone–whether they’re older or younger–you never know what two people share in common on a soul level. I think souls know no age. The only thing that knows age is the mind, and the minute you leave that behind, some people have chemical connections and some people don’t. Love isn’t limited to marriage and sex and whatnot. Teenagers who fall in love–their love is just as real, just as visceral and just as worthy as that of adults who fall in love.

There’s a lot of discussion in the film about what happens to people after they die. Do you believe in an afterlife?

I believe in energy, and I believe that we all come from the earth and we all come back to the earth. And then what happens spiritually or mentally or emotionally–I have no idea. It’s like what Peter Pan says: “To die would be a very great adventure.”

John Green has said he was consciously trying to subvert gender stereotypes. How do you think Augustus and Hazel’s relationship is different from what we usually see in Hollywood movies?

I think it’s so different because they’re best friends at the core, and then the romance and the sexual attraction get explored later in the book and the movie. And I think that’s what healthy partnerships are: two people who find a really deep friendship and sense of pride and trust and respect for one another. I think it’s incredibly realistic.

You’ve talked about being conscious of the messages you send to young female fans when you’re taking roles. Do you consider yourself a feminist?

No, because I love men, and I think the idea of “Raise women to power, take men away from the power” is never going to work out because you need balance. With myself, I’m very in touch with my masculine side. I’m 50% feminine and 50% masculine, same as I think a lot of us are …

My biggest thing is really sisterhood more than feminism. I don’t know how we as women expect men to respect us, because we don’t even seem to respect one another. There’s so much jealousy, so much comparison and envy. It’s just so silly and heartbreaking in a way. I think that movie The Other Woman looks really good, because I think it’s really neat that it shows women coming together and supporting each other.

Even though they come together to bring down a man?

Yeah, but they created a sisterhood. He did something wrong, and they’re going to go after him for it. I think that’s great.

You’re known for living such a healthy lifestyle. Where do you get your health advice from?

I pick up tips from everywhere, but the Internet is such a great database. There is an amazing website by this man named Daniel Vitalis–I would say 90% of how I live my life is because of him. He talks about rewilding–awakening our inner wildness and returning to our nature and the nature of our ancestors. That’s so important because as humans we’re just creatures.

What do you do to unwind? 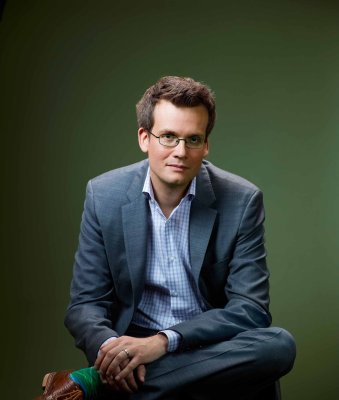 Behind the Scenes with John Green
Next Up: Editor's Pick