The Toxic Appeal of the Men's Rights Movement

Imagine a kid who got a cone with three scoops of ice cream in it. Good flavors, too. Like peanut-butter chocolate, plus a scoop of cookie dough. In a waffle cone. And then this child whines about the lack of chocolate sprinkles on top.

Welcome to the men’s rights movement.

Wait, what? Men’s rights? That’s a thing? Yes, it’s a thing, and while there are certain legitimate aspects to men’s rights activism, or MRA, it’s overwhelmingly a toxic slew of misogyny. This world of resentment and hate speech has been brought to light in recent days as we learned about the vitriolic forum posts and videos left behind by Elliot Rodger, the 22 year-old accused of killing six people in Santa Barbara last week. But it’s hard to comprehend from Roger’s delusional rants how potent the movement’s message can be for ordinary men.

MRAs believe the traditionally oppressed groups have somehow seized control and taken away their white male privilege. They tap into fear and insecurity and turn it into blame and rage. Often the leaders of these groups are men who feel as though they got screwed in a divorce. They quote all sorts of statistics about child custody and unfair alimony payments, because in their minds, the single mother who has to choose between feeding the kids or paying the rent is a myth. They believe passionately in their own victimhood and their creed goes something like this: Women are trying to keep us down, usurp all our power, taking away what it means to be a man.

One popular MRA site is AVoiceForMen.com, with a mission to “expose misandry on all levels in our culture” and “denounce the institution of marriage as unsafe and unsuitable for modern men” as well as “promote an end to chivalry in any form or fashion” and “educate men and boys about the threats they face in feminist governance.” They also want an “end to rape hysteria” and promote “civil disobedience.” In their defense, AVFM does support nonviolence, but with all the inflammatory rhetoric, do readers always take heed?

There are Reddit threads and other Internet forums dedicated to men’s rights, and the language and vitriol towards women and especially towards feminism is appalling. Any messages of nonviolence seem lost in the hate mongering. These groups spew logically faulty statistics about the prevalence of male rape and spousal abuse, and how there really is no glass ceiling or pay inequality, and general complaints about how “that bitch got my promotion because she has a uterus.”

Men’s Rights Canada made headlines again recently with their classless response to an anti-sexual assault campaign called “Don’t be that guy.” Posters went up across the nation implying women aren’t punished enough for infanticide, stating, “Women can stop baby dumping. “Don’t be that girl.” This was a follow up of the same campaign from last year alleging many women made false rape accusations because they felt guilty over a one-night stand.

As a white man who writes about fitness, I’m very aware of the pressures on men and the many ways that these kinds of hateful messages reach my audience, both overt like the Canada ads and the less blatant claims of male victimhood in mainstream media. It’s clear that the definition of masculinity is in flux, and for some men that’s frustrating, especially with near-pornographic ad campaigns promoting women as objects of sexual conquest. And while there are aspects of MRA that are worth bringing to light, as a movement it can suck a good man down a rabbit hole of resentment. It is backward-looking and pining for good old days that never were.

Are there some problems with specific instances of unequal treatment? Yes. Is there some anti-male sentiment out there? Yeah, that happens too. But turning these issues into a movement is laughable. It is a like a multi-millionaire who whines that a tax loophole was closed and he’s losing 0.5% of his annual income.

Men, especially white men, aren’t marginalized, we aren’t under attack, and we not in danger of losing the overwhelming privileges society bestows upon us for having pale skin and a penis. However, MRAs have been described as whining children by the women they call “feminist bitches.”

So to any man who feels like he’s getting caught up in such a movement because they feel emasculated or are just having trouble relating to women and perhaps sympathizing with Elliot Rodger, I will tell you this: Life isn’t fair. Life is NOT fair.

Women will judge you. Some will judge you based on your appearance, your height, your width, you genitalia, your wealth, your car, your clothes, your acne. In other words, they will judge you the exact same way you judge them.

Fell is a syndicated fitness columnist for the Chicago Tribune and Los Angeles Times. He blogs at http://www.SixPackAbs.com. You can follow him @bodyforwife 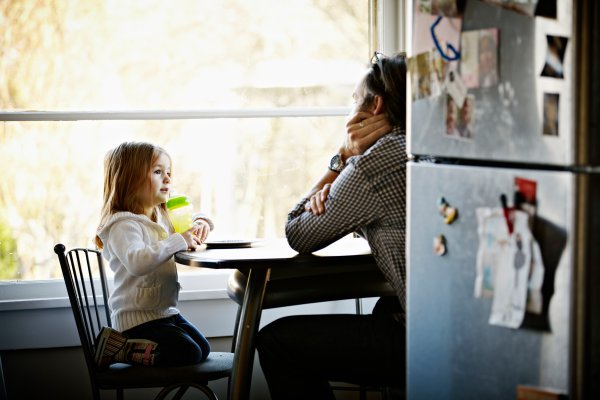 Dads Who Help at Home Raise Aspirational Daughters
Next Up: Editor's Pick