The U.S. Coast Guard rescued a dog that was having a ruff week.

The crew of the cutter Bristol Bay found a dog that was stranded on the ice of frozen Lake St. Clair Monday, about four to five miles off the coast of the Detroit suburb St. Clair Shores, the Associated Press reports via The Detroit Free Press. Tasked with icebreaking in the Great Lakes region, crew members were en route to extract another vessel that got stuck in the ice when they came across the dog with what looked like some foxes.

“They noticed three burrows the dog tried to dig for itself for protection,” Chief Petty Officer Alan Haraf told the Detroit Free Press. “They said the paws were bleeding, and the nails were pretty much down to nothing.”

The Coast Guard officials fed and cared for the dog on their ship, nicknaming it “Lucky” before handing it off to a local animal shelter.

Crew members assigned to Coast Guard Cutter Bristol Bay hoist aboard the ship a dog and gave it food and care before before taking it to an animal shelter. 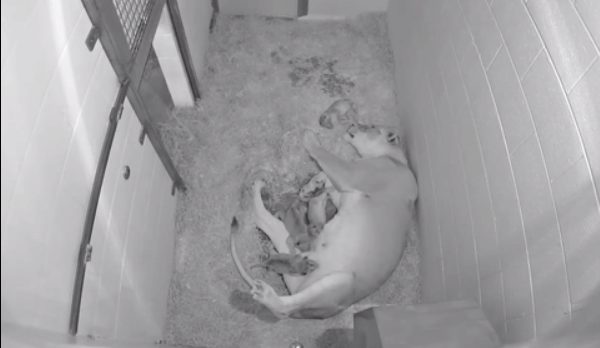 March Comes In Like Four Seriously Cute Lions
Next Up: Editor's Pick