Child Slaves May Have Caught the Fish in Your Freezer

After two years toiling without pay on a Thai fishing boat, Sai Ko Ko fell ill. “[The captain] verbally abused me but I was so sick I couldn’t work,” recalls the 21-year-old. “He knocked me down, dragged me and threw me into the sea.”

Luckily, Sai Ko Ko was rescued by another vessel and ended up in an Indonesian immigration center. But countless other illegal Burmese migrants like him fair much worse. Many are mere children forced to endure slave-like conditions. And, shockingly, the fruits of their anguish continue to be unwittingly enjoyed by families across the U.S., Europe and elsewhere.

Thailand is the third largest seafood exporter in the world. The sector was worth some $7.3 billion dollars in 2011, and around a fifth of the catch ends up on American dinner tables — particularly tuna, sardines, shrimp and squid. But the industry heavily relies on trafficked and forced labor on unlicensed vessels. Victims typically hail from Cambodia, Laos and, most commonly, Burma. Beatings and starvation are commonplace.

On Tuesday, the London-based Environmental Justice Foundation (EJF) released a report detailing Sai Ko Ko’s plight and that of tens of thousands like him. Slavery at Sea calls on the Thai government, international community and consumers to demand “net to plate” traceability on all seafood products.

Much has been made of recent reforms in Burma, officially known as Myanmar, as the former pariah state transforms into a quasi-democracy following a half-century of brutal junta rule. But for many on the ground, especially myriad ethnic minorities, precious little has changed. Most of the 55-million population subsists on less than a dollar a day, and three quarters don’t have electricity. Promises of well-paid jobs in neighboring nations continue to entice.

Around three millions Burmese migrants currently live in Thailand. (When in May 2012 Nobel laureate Aung San Suu Kyi made her first trip abroad for 24 years, she tellingly visited compatriots in Mahachai, a commercial fishing hub 20 miles south of Bangkok known as “Little Burma.”) Many would-be migrants, not possessing valid documentation, pay brokers several hundred dollars to arrange their passage over the border, with the promise of well-paying jobs upon arrival.

In reality, vulnerable individuals are sold to fishing boat captains for a huge profit, and must then work off several thousand dollars of “debt.” Thai immigration and law enforcement officials are often complicit in these deals. Prosecution of perpetrators is rare. Many migrants get sold from boat to boat and don’t see land for years, sleeping in the open and forced to take bizarre amphetamine cocktails to stay awake for days on end. Due to dangerous conditions and tortuously long hours, work-related injuries are commonplace, and many throw themselves overboard to their deaths as their only means of escape.

Even for young slaves who are rescued, there is no end to the nightmare. Aye Ko Ko, 17, was among 14 people rescued from a fishing boat last March only to spend the next year at a detention center. “No one helps us,” he told EJF in January. “No organizations come to see us, like they did before. Some people are tired of it all and just want to go home.”

Overfishing has compounded the problem. Back in 1961, fishermen in the Gulf of Thailand caught 300 kg (661 lb) of fish an hour. Fast-forward half-a-century, and they now pull in a measly 25 kg, says Greenpeace. Falling profits leads to a demand for cheaper labor. According to the International Labor Organization, last year the Thai fishing industry had a 50,000-worker shortfall, “both a cause and an effect of the abusive labor practices that are seen in the fishing sector.”

The Thai government says it is working on the issue. Thai Labor Ministry Deputy Permanent Secretary Boontharik Samiti told Associated Press that “all agencies have collectively come together in an effort to prevent this problem in a sustainable and long-term fashion.” But lack of progress in human trafficking has been noticed by the U.S State Department, which produces the annual Trafficking in Persons Report, and this year will likely move Thailand to the worst of four categories. Restrictions on fish imports could follow as a consequence.

Andy Hall, a migrant labor expert based in Thailand and Burma, tells TIME that consumers hold the key. “People are still buying the fish from Thailand so there’s no really an incentive to get serious about this issue,” he says, adding that the enforcement resources available to the Thai authorities are “miniscule compared to the size of the problem.”

Hall highlights how pressure by Finnish retailers has led to a boycott in Thai pineapple products after similar abuses were highlighted. “We don’t see that kind of pressure in other parts of Europe, and especially not in the U.S,” he says. “Your average consumer in the West doesn’t have so much interest in where their products are coming from.” Human traffickers count on that apathy. 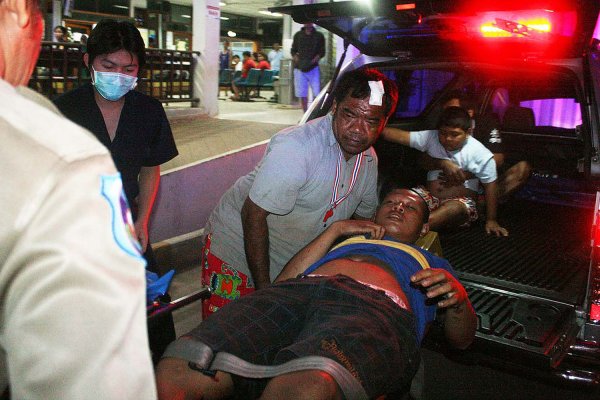 Three Children Dead in One Weekend: Thailand’s Political Violence Is Officially Out of Control
Next Up: Editor's Pick