Ukraine, Not the Ukraine: The Significance of Three Little Letters

U.S. President Barack Obama pauses as he answers a question regarding the ongoing situation in Ukraine during his visits to Powell Elementary School in Washington, D.C., on March 4, 2014
Pablo Martinez Monsivais / AP
By Katy Steinmetz

U.S. President Barack Obama stood at a local elementary school in Washington, D.C., on Tuesday to tout his new budget proposal. But after his opening remarks, the first question was inevitably about foreign affairs. In response to a reporter who asked about Russia’s Vladimir Putin, Obama eventually said this: “It is important that Congress stand with us. I don’t doubt the bipartisan concern that’s been expressed about the situation in the Ukraine.”

It’s likely that any Ukrainian Americans tuned to C-SPAN at that particular moment cringed, not at the prospect of the country’s salvation coming from Congress’s bipartisan expressions — unsettling though that thought may be — but from three little letters: the.

“Ukraine is a country,” says William Taylor, who served as the U.S. ambassador to Ukraine from 2006 to 2009. “The Ukraine is the way the Russians referred to that part of the country during Soviet times … Now that it is a country, a nation, and a recognized state, it is just Ukraine. And it is incorrect to refer to the Ukraine, even though a lot of people do it.”

In recent weeks, as the upheaval in Ukraine has escalated, many journalists and U.S. Administration officials and pundits have been guilty of the same sin as Obama, who usually gets it right. Though such slips are not meant to be slights, they can still rankle people from a nation that became independent in 1991 and is now fighting to maintain stable autonomy as Russian boots step onto their soil. Taylor says that the diaspora, those Ukrainians now abroad and hearing reports about their homeland in English, are particularly sensitive to this definite article. “Whenever they hear the Ukraine, they fume,” Taylor says. “It kind of denies their independence, denies their sovereignty.”

This might seem like politically correct oversensitivity, the kind of thing liberals leak eyewater about with a box full of weakness tissues at their side. And there are certainly some cocktail-hour conversations that would not be materially changed by the presence or absence of the word. But Taylor says that dropping it sends an important message, especially among world leaders, because “the Russians don’t really, in their gut, accept that there’s an independent Ukraine.” He cites Putin sending troops to Crimea as evidence that the Russian leader views the country as a “province” of his own.

There are plenty of times when sticking a the in front of a place name is perfectly acceptable, like when one is referring to a country that is a geographic area, like the group of islands that makes up the Philippines, or a region of a country, like the Northeast. You might be differentiating the United Kingdom from all other kingdoms. And in English, you would almost always tack the in front of river names like the Mississippi. Some countries named for rivers have long kept the article, like the Congo, as University of Sussex linguistics professor Lynne Murphy points out in this post on the subject. Plural names, like the United States or the Netherlands, get one too.

Ukraine’s name is thought to come from the Slavic word for borderland, and grammatically, saying the borderland or the borderlands makes sense. And before Ukraine was independent, the official name — the Ukrainian Soviet Socialist Republic — did have an article. But Tamara Gallo Olexy, the president of the Ukrainian Congress Committee of America, says that etymology or old names are really beside the point. “We correct anybody that we’re speaking to,” she says. “It’s this feeling that you’re part of another country, that you are a territory of somebody else.”

Taylor has another linguistic pet peeve that he fought to eradicate from the government’s vocabulary during his time as ambassador: spelling Ukraine’s capital as Kiev, rather than Kyiv. Kiev is the Russian transliteration, while Kyiv is the Ukrainian one. Taylor says he had to call on allies among multiple agencies, roping in the official geographer and Department of Defense, before he could get the spelling changed to Kyiv on official State Department documents. Using the Russian spelling, he says, affirms this “condescending view that Russians have” of the country. “You’re falling into the Russian habit, the Russian frame of mind,” he says. Today, State Department press releases still use Kyiv, though the White House is inconsistent on the issue (Exhibit 1 and Exhibit 2).

TIME uses Ukraine, sans article, and Kiev, because that’s the spelling Merriam-Webster uses, and that is our go-to reference. Our chief copy editor Dan Adkison points out that we often use a more common spelling rather than transliterating countries in their mother tongue; TIME uses Sweden, not Sverige. Still, he doesn’t rule out switching from Kiev to Kyiv, particularly if that form becomes more familiar to readers. Taylor lost a battle with Washington Post editors when he wanted to use that spelling in an op-ed he wrote this week. But he’s going to keep crusading. “Old habits die hard,” he says. “But it can be done.” 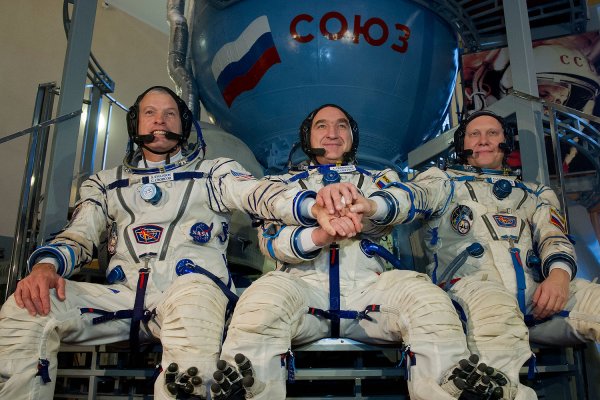 NASA Says Relations With Russia Unscathed by Earthly Concerns
Next Up: Editor's Pick