The Standoff at Belbek: Inside the First Clash of the Second Crimean War

Unarmed Ukrainian soldiers approach Russian positions on the perimeter of the contested Belbek air force base in Crimea to press demands to return to their positions there and conduct joint patrols, March 4, 2014.
Yuri Kozyrev / NOOR for TIME
By Simon Shuster

The Ukrainian troops kept the bonfires burning all night on Monday, kicking stones into the embers and waiting for the sun to rise over the Belbek air force base in southern Ukraine. Five days had passed since the start of the siege against them and the strain on the troops was starting to show. The previous day, the Russian forces surrounding their base had issued another ultimatum – surrender your weapons that night and sign an oath of allegiance to Russia or face an assault by 5:00 a.m. The commanders had refused. Some of the troops had defected. The rest stood around the garrison, smoking cigarettes and twitching when the logs popped in the fires. They only understood that the Russians had been bluffing when the roosters started to crow.

The next bluff came soon after, and it marked a turning point in the week-old conflict that has brought Russia and Ukraine to the edge of a fratricidal war. Just before morning reveille, Colonel Yuli Mamchur, the base commander, got word from one of his lieutenants that the Russian officer in charge of the siege, a lieutenant colonel of the special forces who only identified himself as Dima, had called again. His terms were the same, only the deadline was different – surrender by 4:00 pm on Tuesday or the Russians would cut off the power and the gas lines to the base. “What they’re trying to do is make us snap,” Mamchur told TIME. “It’s a mind game.” He decided to call Dima back. Without consulting his ranking officers, Mamchur told the Russian officer that the men under his command – Ukraine’s 204th Tactical Aviation Brigade – was about to march on the Belbek air field that the Russians had occupied. Then he hung up the phone.

The plan he had was reckless if not suicidal. He wanted his men to leave their Kalashnikovs at the base, get into formation and march behind him into the Russian checkpoint about a kilometer up the road. Practically all of them volunteered, but he left half his men behind to guard the base and took the other half with him in a column. He intended to answer the Russian ultimatums with his own psychological attack. His men would be unarmed, and leading their column would be a flagman with a Soviet relic – the banner of the 62nd Fighter Aviation Regiment that had been based in Belbek during World War II. Any soldier born in the Soviet Union would have heard the stories of its legendary pilots, the ones who had taken on the Nazi Luftwaffe in 1941 then went on to guard the skies above the Yalta Conference in 1945. Mamchur reckoned that no soldier with any respect for the heroes of the Soviet Union would shoot at a column carrying that banner.

He guessed right. As he approached the Russian checkpoint with his men trailing behind, three troops came forward and raised the barrels of their assault rifles. They ordered Mamchur to stop, and when he refused, they began firing bursts into the air, one after another, screaming that they would shoot to kill. They were the first shots fired since the Russian occupation of Ukraine’s Crimean Peninsula began last week, so at the sound of the gunfire, the column wobbled. Some of the men ducked but they all kept marching. Only when Mamchur was a few paces from the Russian troops with a Kalashnikov pointed directly at his face did he order his men to stop.

What followed was a stand-off lasting well into the afternoon. Mumchar put forward a simple demand. “It is our duty to the constitution of Ukraine to guard this base,” he said. The Russians could remain in control, as no one had the fire power to evict them. But the Ukrainians insisted on taking their positions beside the fighter jets and radar stations of their occupied base. The Russians asked for two hours to consult with their commanding officers, and the Ukrainian brigade began to wait in the middle of the road. All around them, in the bushes of the surrounding fields, Russian snipers and machine gunners had taken up positions, training their sights directly at the Ukrainians.

Not long before noon, many of their cell phones began to ring. Colonel Viktor Kukharchenko, the deputy commander of the Belbek base, got a call from an old friend from the Russian army, Colonel Maxim Obidnik, and turned on the speaker phone so that the assembled journalists and troops could have a listen. “Putin’s on TV,” said a frantic voice on the other end of the receiver. “He’s ordered his troops to pull back.”

In his residence outside Moscow, Russian President Vladimir Putin was just then giving a press conference, his first appearance before the media since Russian troops began taking control of Crimea five days earlier. Amid his rambling and self-contradictory statements – Putin denied, for one thing, that any Russian forces were occupying Crimea – the Russian commander-in-chief ordered the troops playing war games near Ukraine’s eastern border to go back to their bases. That did not mean the occupation of Crimea was over, but it was a clear deescalation of the conflict. Without troops massed in western Russia, it was a lot less likely that Putin would follow up the occupation of Crimea with an invasion of eastern Ukraine.

“You’re heroes!” shouted the voice on the line to Colonel Kukharchenko. “You made Putin back down!” That most likely wasn’t true. No one can say what made Putin back away from his preparations to invade Ukraine’s eastern provinces. But as the officers of the Belbek base stood there on that road, it felt to many of them like they had just defeated a nuclear superpower with nothing but an old, red banner. In some ways the upset made a lot of sense. That banner symbolized all the insanity of conflict between Russia and Ukraine.

“The only soldiers who’ve ever fired in anger on this base were the Germans,” says Major Vladislav Kardash, a deputy squadron commander at Belbek. “Now we have Russians shooting their weapons here to scare Ukrainians. It’s lunacy. Putin’s gone completely paranoid. He’s lost his mind.” Since the occupation of Crimea began, Kardash says his friends in the Russian Black Sea fleet, which lies within marching distance of the Ukrainian base at Belbek, had stopped taking his phone calls. None of the men at the Ukrainian base are happy, he says, with the new government that came to power in Kiev after last month’s revolution. The nationalists involved in that uprising worried the men of Belbek just as much as they worry the Russians. But because the Ukrainian air force must take its orders from the newly appointed Minister of Defense, says Kardash, “my own Russian friends call me a traitor, a fascist.”

Still, at the end of the standoff on Tuesday, the Russians agreed to grant Mamchur and his men a concession. They allowed a group of ten Ukrainian troops to take up positions in the occupied base, a symbolic gesture but a crucial one in a conflict that has so far seen considerable bluster and intimidation from the side of the Russians. Before dusk, Mamchur decided to turn his men around and march back toward their garrison. When he arrived he learned that the Russian forces had not made good on their threat to shut off the power and gas. But that didn’t make him feel like much of a winner. He was still besieged, outgunned and outnumbered, facing charges of treason in Kiev if he abandoned his base and winning enemies among the new pro-Russian leaders of Crimea if he stood his ground. “I’m still between two fires,” he said Wednesday evening. But at least he had won a moral victory, even if a military one still looks a long way off. 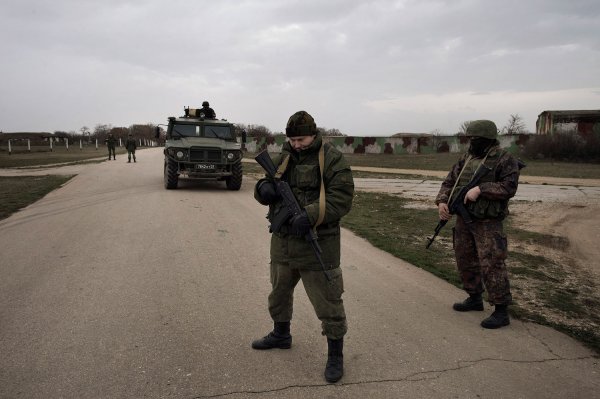 E.U. to Russia: It's Complicated
Next Up: Editor's Pick