Kerry Offers Hope Where Snipers Once Fired in Ukraine

U.S. Secretary of State John Kerry lights a candle and lays roses atop the Shrine of the Fallen in Kiev March 4, 2014.
Valentyn Ogirenko—Reuters
By Michael Crowley / Kiev

The buildings over Institutskaya Street loomed ominously through the grey afternoon mist. High above and just days earlier, snipers had picked off the protesters one by one. They shot the people who came to rescue the wounded, too.

Secretary of State John Kerry stood Tuesday at the spot where some of the protesters had fallen—slain for resisting their government’s authoritarian, pro-Moscow tilt. A couple weeks, there are memorials to the dead: photographs and candles and beautiful bundles of colorful flowers that lie in contrast to the heaps of charred metal, wood, tires and barbed wire that once served as barriers against the now-deposed President Viktor Yanukoych’s goons. Kerry paused near a lamppost with a visible bullet hole.

A pair of middle-aged women pushed through the crowd to Kerry.

“We hope for your help!” exclaimed one.

“We will be helping. We are helping,” Kerry told her. “President Obama is planning more assistance.”

For now, the help comes in the form of $1 billion in loan guarantees announced by the Obama administration the moment Kerry’s plane touched down in Kiev after an overnight flight from New York. Kerry’s motorcade drove straight into the heart of the city—by all appearances calm and orderly—to the area surrounding Kiev’s Independence Square, known as the Maidan.

Kerry, in a dark overcoat and blue scarf, moved his way down the avenue slowly and solemnly. But the scene around him was chaotic. Kerry was crushed inside a pack of reporters, cameramen and passers-by, agog as they snapped photos of America’s top diplomat. Security personnel did their best, but Kerry was dangerously easy to reach in a spot where so much blood had already flowed.

He encountered another pair of women. “What do you think about the things that President Putin is saying about the danger to Russian peoples?” he asked. Putin has used alleged threats and violence against Russians inside Ukraine as justification for intervening across the border; the U.S. says there’s no such evidence.

“We don’t have any danger!” replied one.

“They are making it up!” said the other.

At a memorial for the fallen protesters, Kerry placed a candle. Victoria Nuland, a senior State Department official who has worked on Ukraine issues, kissed a bundle of roses and dropped them on the pile.

“This is so dramatic—this setting, this view, all the flowers,” Kerry said.

His next stop was the Ukraine’s parliament, known as the Rada, and now guarded by a somewhat rag-tag team of self-defense force volunteers. Clad in camouflage uniforms provided by Ukraine’s interior ministry, these men first turned out to defend the protesters on the Maidan. They can now be seen around the city. At the Rada, three of them sat around a barrel fire fueled by wood, which they took turns chopping on the spot.

Even as Putin threatens from the east, Ukraine has huge problems within. Both its politics and its economy urgently need the equivalent of open-heart surgery that must be performed in the back of a flat bed truck on a dirt road. Inside the Rada was a reminder of the human stakes: a long table featuring the framed photos of about one hundred slain protesters—most of them young men, aged 18-20. Kerry toured the table somberly, then went into meetings with the country’s post-Yanukoych political leadership.

“What they stood for so bravely,” Kerry later said of the Maidan’s fallen, “will never be stolen by bullets or by invasions. It cannot be silenced by thugs from rooftops. It is universal, it’s unmistakable, and it’s called freedom.” 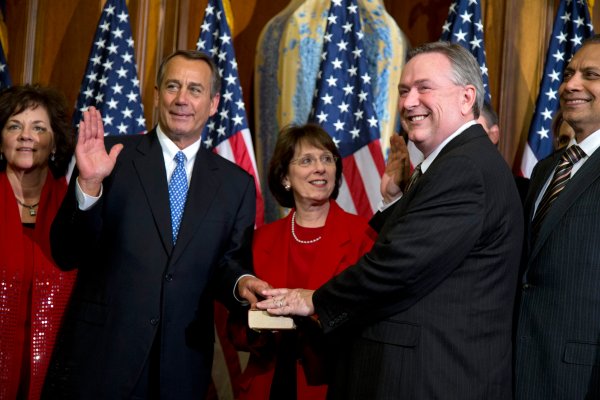 7 Ways to Lose An Election
Next Up: Editor's Pick