Senate Majority Leader Harry Reid stepped up his war of rhetoric against conservative billionaires and liberal boogymen Koch brothers Tuesday, saying on the senate floor that his Republican colleagues were “addicted to Koch”

Reid’s play on words — Charles and David Koch share a homophonous name with a recreational drug — came less than a week after Reid called the brothers “un-American” for funding anti-Obamacare attack ads. The Nevada Democrat went on: “Based on Senate Republicans’ ardent defense of the Koch brothers and the fact that they advocate for many of the same policies as the Koch brothers, it seems my Republican colleagues also believe in a system that benefits billionaires at the expense of the middle class.”

Once Reid was finished with his speech, Minority Leader Mitch McConnell took to the floor to say how “curious” it was that Reid failed to mention Tom Steyer, the former hedge fund manager who said he hoped to spend $100 million this year to influence elections towards pro-climate change candidates.

“It strikes me as curious that if we are going to demonize people for exercising their constitutional rights to go out and speak and participate in the political process, we would just pick out the people that are opposed to us and leave out the people who are in favor of us,” said McConnell.

Pollster John Anzalone, whose client Sen. Kay Hagan (R–N.C.) has been the focus of $8 million worth of Koch-funded attack ads, said the conservative billionaires have brought such attacks on themselves. “As much as these guys love to be behind the curtain, the reality is that if you stroke that big of a check and you try to influence races in other states you’re going to be a target,” said Anzalone. “It’s outside money…it resonates; people don’t like it. It’s pretty well tested.” 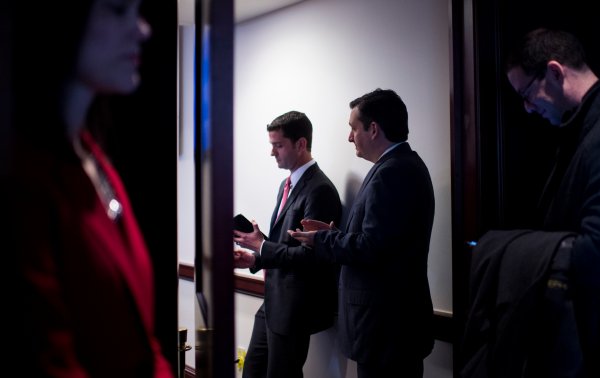 Conservative Group Tries to Get Back to Its Policy Roots
Next Up: Editor's Pick