As fully expected, the man who deposed Egypt’s last elected president — and who has been running the country for the 10 months since — will remain in charge. Early on Thursday, supporters of Abdel Fattah al-Sisi, said the former field marshal had garnered 23.38 million votes, while his only opponent, the leftist political activist Hamdeen Sabahi, was said to have notched up just 735,285.

But if the outcome of the election was never really in doubt, the way balloting unfolded this week had the perverse effect of undermining the winner — and in more ways than one. Embarrassingly low voter turnout has cast a shadow over al-Sisi’s victory, which he had framed as a request for a “mandate” from an Egyptian public that government and private media alike portrayed as in rapturous thrall of the career soldier. The Sabahi campaign said just 25 percent of voters showed up at polls during the two days of official voting; an Egyptian official put the figure at “about 37 percent.” Neither figure could be confirmed by independent observers, but both were well below the 52 percent turnout in the 2012 presidential ballot.

Perhaps worse for al-Sisi, in political terms, was the decision to extend voting to a third day in order to boost turnout — a move that only served to emphasize the lonely emptiness of numerous polling places. His campaign sought to distance itself from the extension, which even according to official sources quoted by Reuters early Wednesday produced barely half the 80 percent turnout al-Sisi had sought. In the end, an election carefully presented as the public coronation of a new military strongman turned out to be something else altogether: A display of the deep and wide cleavages in the nation of 80-million the new president will have to govern.

Those divisions were what prompted al-Sisi to dispose of Morsi, whose Islamist Muslim Brotherhood government had ruled with a high hand after just scraping into office. But the tensions have been exacerbated by the crackdown al-Sisi enforced against Morsi supporters. Despite the hagiography of al-Sisi by Egyptian media, a rare external public opinion survey released May 22 found that only 54 percent of Egyptians approved of al-Sisi – the same percentage who approved his removal of Morsi (who had enjoyed similar approval ratings just a year earlier).

The poll, conducted by the well-regarded Pew Charitable Trusts, based in Washington DC and Philadelphia, questioned 1,000 Egyptians in face-to-face interviews in mid-April. It found the Brotherhood retained significant support in Egypt — 38 percent voiced a favorable opinion of the group, despite it being dubbed a terrorist organization last December by the interim government al-Sisi put in place. Brotherhood supporters had called for a boycott of the presidential ballot, and the low turnout might indicate a measure of success: Rank and file of the Nour Party, the most prominent remaining Islamist party, reportedly ignored their leaders’ instructions to cast ballots.

Voters found other reasons to stay home as well — including a heat wave that Sisi’s campaign cited on its website. But the net effect of the disappointing turnout was to shine a spotlight on the one word that Morsi supporters have made their slogan since his removal: “Legitimacy.” His supporters shout it as they march into the courtroom where the deposed president is on trial.

“I’m not sure what we’re looking for in Sisi,” Ali Desoke, the owner of a modest central Cairo sandwich shop said in a pre-election interview. “Are we looking for a new hero? A new pharaoh?” The Pew poll had an answer to that as well, asking Egyptians whether democracy was more important, or a stable government without full democracy. Unlike a year ago, a majority — once again, 54 percent —– said a stable government was more important.

That appears to be what al-Sisi is giving them. Though running as protector of the 2011 revolution that ended President Hosni Mubarak’s three decades of autocratic rule, al-Sisi presided over an interim government that banned public demonstrations, killed 1,000 Brotherhood supporters and arrested more than 20,000 people, including prominent journalists.

“The Egyptian people and democracy, it doesn’t work like it does in Europe,” Ahlam Ali Mohamed, a 47-year-old housewife in Alexandria, who voted for Sisi, told Reuters. “I voted today because I want to feel safe.”

Sisi’s campaign was founded on that desire. “If this framework is not tight between the police, the people, the courts and the government, Egypt is in danger,” Hazem Abdel Azim, a senior campaign official told TIME earlier this month. “It’s very important to have this binding relationship.”

Others toyed with the reductionist notion that — after thousands of years under pharaohs, kings and, since 1953, career military men — Egyptians embraced the familiar. “It’s easy to be determinist, to say after 7,000 years of Pharaohs, our government perhaps hasn’t changed over time, because we haven’t thought it would be any other way: One strong ruler,” says Mohamed Lotfy, a founder of the Egyptian Commission for Rights and Freedom, an independent human rights group. But he goes on to observe that the French struggled under despots for decades after their revolution, and that the last three years have left Egyptians exhausted — another explanation for the low turnout.

“People got tired of calling for change and not getting what they want,” Lotfy says.

Indeed, Pew found dissatisfaction with the way things are going in Egypt, at 72 percent, higher than before the 2011 revolution. Desoke, the sandwich maker who asked if Egyptians want another pharaoh, supports Sisi but considers his candidacy a colossal mistake. “By running, he’s losing a lot,” he says, “and if he wins he will lose even more. Because the problems are still there. Look at the problem of the economy. 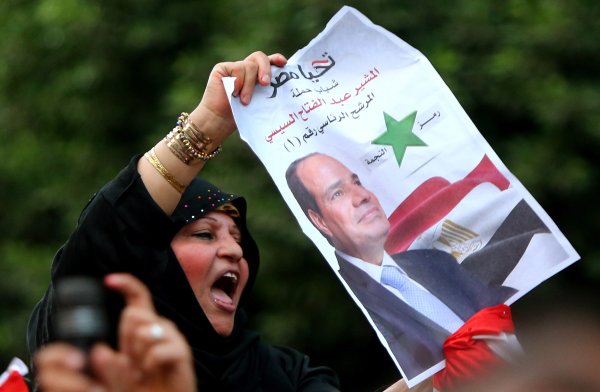 Why Egypt Extended Elections to a Third Day
Next Up: Editor's Pick