The new commercial from MarijuanaDoctors.com might seem to make perfect sense to a medical marijuana patient who has just taken a dose of their medicine. For most others, the logic may take a moment to sink in.

During the one-minute spot, which the company is touting as the first ever medical marijuana business commercial to air on major networks, a faux dealer pushes sushi in the street, opening up a coat filled with raw fish like cartoon thieves open trenchcoats filled with black-market Rolexes. “You wouldn’t buy your sushi from this guy,” the voiceover concludes. “So why would you buy your marijuana from him?”

“We felt the viewing public would agree that in the states providing safe access, continuing to obtain medicine illegally is as absurd as purchasing raw fish from a drug dealer,” the company’s CEO Jason Draizin said in a press release. Of course, purchasing “sushi” from the “sushi dealer” remains the only option for those who are obtaining the “sashimi” for recreational purposes, as opposed those who require “California rolls” for medical reasons, in most places.

Currently, 20 states and Washington, D.C. have legalized the use of marijuana for medical purposes. The spot will begin airing in New Jersey, one of those states, via Comcast on stations such as Fox, CNN and ESPN, according to the release.

MarijuanaDoctors.com operates as a middleman, connecting people seeking marijuana for medical purposes with doctors who provide those prescriptions. The commercial will be airing nearly two decades after California became the first state to legalize medical weed in 1996.

While the ad may break a grass ceiling of sorts on marijuana-related commercials, it’s worth noting that political ads for legalizing marijuana have also run on major networks. Mason Tvert, communications director for the Marijuana Policy Project, say that advocates in Colorado aired this ad during the Today Show and Ellen in 2012. And they aired this ad during the Democratic National Convention that year on stations like CNN and MSNBC.

In the release, Draizin emphasizes that getting the commercial accepted by big name broadcasters was no easy task, a battle that Tvert knows well. “Marijuana has been demonized by our government for decades, so many people still have a knee-jerk negative reaction to anything that even mentions the substance,” Tvert says. “Over the past decade, we have been rejected by countless TV networks and billboard companies.” This new ad may be a (memorable) sign that the tide is turning. 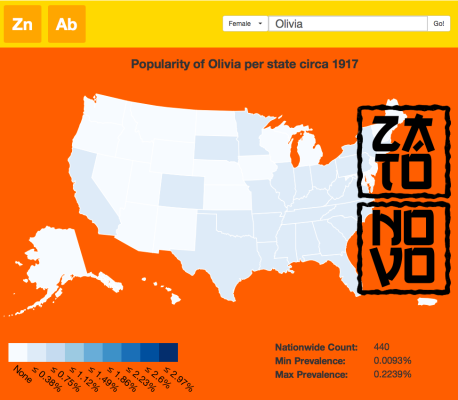 This Interactive Map Shows How Baby Names Have Spread Nationwide
Next Up: Editor's Pick