A judge ruled last week that all witnesses in the Olympian double-amputee’s murder trial had a right to privacy from media scrutiny, NBC reports. But South African TV station eNCA broadcast an image of Burger taken from the website of the university where she teaches, saying that the image was publicly available and therefore did not violate the judge’s order.

Judge Thokozile Masipa then said that no photographs of any witness of any source should be broadcast, and that the media should “behave.” eNCA later apologized:

Burger testified that she heard screaming coming from the home where Pistorius killed his girlfriend, model Riva Steenkamp, before shots rang out. Defense attorneys attempted to cast doubt on Michelle Burger’s highly emotional testimony, saying her account was too similar to her husband’s statement, CNN reports. Burger explained that the testimony was similar because both she and her husband heard the same thing. “I’m as honest as I can be to the court,” she said.

Pistorius has admitted he shot and killed Steenkamp on Valentines Day 2013, but pleaded not guilty because he says he thought he was shooting an intruder. Pistorius says he shot into the bathroom thinking his girlfriend was in bed, and only later realized he had shot Steenkamp. Court documents show that Pistorius raced out of bed on his stumps, without his prosthetic legs, and shot into the bathroom after hearing a noise. “It filled me with horror and fear of an intruder or intruders being inside the toilet,” he said. “I thought he or they must have entered through the unprotected window. As I did not have my prosthetic legs on and felt extremely vulnerable, I knew I had to protect Reeva and myself.”

Burger testified Monday that she heard a woman screaming before the gunshots. “Something terrible was happening at that house,” she said. Her testimony supports the prosecution’s argument that Pistorius intentionally shot Steenkamp as the result of an intense argument. 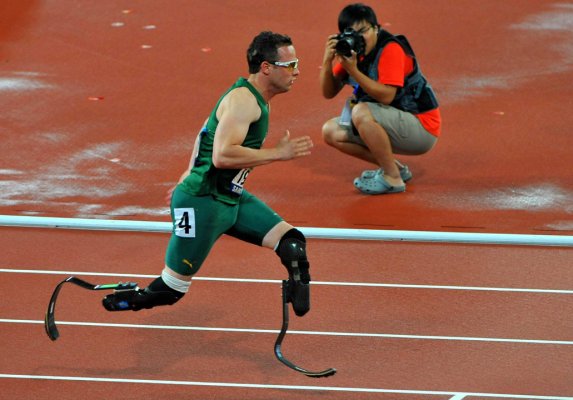 How Oscar Pistorius Went From Track Star To Accused Murderer
Next Up: Editor's Pick