Men gather at a newly reopened mechanic's shop in the Barze neighborhood of Damascus on May 14, 2014.
Yuri Kozyrev—NOOR for TIME
By Aryn Baker

When a ceasefire in a rebel-held enclave of Homs, Syria, concluded on May 9 with the peaceful exit of fighters aligned against the government of President Bashar Assad, Syrians on both sides of the divide celebrated the end of a vicious, urban battle that had cost thousands of lives. Now the government wants to use the Homs Old City ceasefire, and others like it, as a template for pacifying other opposition-held parts of the country. Already a similar truce is in place in the Homs neighborhood of Waer, which could mean that the entire city of Homs, once dubbed the “Capital of the Revolution,” will be in government hands. Government officials call the Homs ceasefire a turning point in a war now in its fourth year: “We are really optimistic that if we continue succeeding with these reconciliations, [we will have] a real victory,” Syrian Deputy Foreign Minister Faisal Mekdad tells TIME. The only problem is that it is unlikely to bring a definitive peace, and it may not work in the rest of the country.

But many Syrians, including low-level fighters and anti-government activists, saw the Homs ceasefire as a rebel surrender, negotiated after two years of continued shelling and a military siege that essentially starved the insurgents, and a few hundred civilians along with them, into submission. It has become a familiar pattern: the army starts with a blockade, pounds the area with artillery and airstrikes and, only once those trapped inside are exhausted and ready to give up, do they negotiate a ceasefire. Assad’s allies say the ceasefires are a Syrian solution to what has become an issue of international concern; at a recent security conference in Moscow, Russian envoy for the Middle East Mikhail Bogdanov suggested that he saw “local pacifications in Syria as an important prologue to a subsequent comprehensive ceasefire.”

What Homs Looks Like After Two Years of Siege

But these ceasefires fall far short of true reconciliation. In a recent interview with al Monitor, an online newspaper dedicated to Middle East affairs, former United Nations envoy for Syria Lakhdar Brahimi, who stepped down on May 13, called the U.N.-brokered Homs ceasefire little more than a tactic of war. “We cannot forget that we reached that negotiation through two years of starvation imposed on people, and this is definitely not right.” The Homs ceasefire, he said, “is part of the continuing war, it is not the beginning of a peaceful process.”

Once the scene of some of the war’s bloodiest fighting, the Barze neighbourhood of Damascus has been calm since February, when a Syrian Army major and a rebel commander agreed to an armed ceasefire after three months of negotiations. The major, who refused to give his name as he was not authorized to speak to the media, claimed that Barze’s “reconciliation” had been the “seed” for other similar negotiations, and that “90 percent” of the area’s residents had returned to pick up their lives. It was a statement belied by the ghost-town feel of Barze, where towering apartment blocks, scarred by mortar fire, remain dark. Mechanic Abu Nidal, who returned to Barze in late April to reopen his auto-repair shop, says residents have little faith that calm has returned for good. “There are still some tensions here,” he says. Even if their leaders had reached an accord, not all the fighters were on board. “I am afraid one side will get nervous, and things will explode.” It’s not an idle fear. A gang of young, armed men loitering nearby — remnants of a rebel militia — were visibly frustrated. “This isn’t a reconciliation; this is a ceasefire,” growled one young man sporting a thick beard and a handlebar mustache. His companions, automatic rifles slung casually across their backs, nodded in agreement.

Video report from the cemetery of Al-Zahra, Homs

Elia Samman, a member of one of Syria’s legal and recognized opposition parties (as opposed to the armed opposition), says that so far no real reconciliations have been achieved in Syria. These local agreements may reduce tension, violence and bloodshed, says Samman, who works as an advisor to the Syrian Ministry of Reconciliation, but they are inherently fragile if they are not accompanied by political reform. Nor can they work in parts of Syria where foreign fighters have infiltrated rebel groups, as is the case in the north and east of the country. There are an estimated 12,000 foreign jihadis fighting the Assad regime alongside Syrian rebels. Due to their discipline, military prowess and ample sources of funding from foreign backers, they have an outsize influence on how the war is conducted. “We hit a brick wall when we try to achieve reconciliation in areas where there is a strong presence of foreign fighters,” he says, citing the northern city of Aleppo as an example. “They are not interested in a political resolution. They want to establish an Islamic state.” Nor are they as likely to be cowed by a military siege. “They are here for jihad. Not [for] saving Syria for Syrians.”

Even in Homs, where most of the fighters were Syrian, the prospects for true reconciliation are limited. Former residents of the area, who celebrated the ceasefire by thronging the historic churches and mosques that had long been an integral part of this thriving, multi-sectarian neighborhood, are doubtful it will last. As soon as the blockade was lifted, 33-year-old woodcarver Talhat Ghanoum rushed to the 11th century Khaled Ibn Al-Waleed Mosque in the Old City to say prayers. “We are all happy with the ceasefire,” he tells TIME. “It means I can come back to my mosque.” But beyond the immediate prospect of being able to regain a life put on pause by the war, he is skeptical that the ceasefire will bring anything resembling peace, and may yet usher in a period of even more bloodshed. “You can’t ask anyone to forget the death of a son or a father. Everyone is waiting for revenge. People will be kidnapping members of the other sect, killing them, and then that sect will do the same. The search for revenge will continue for generations. We will not forgive what they have done to us.” The government may call it reconciliation, but until the old grievances that launched the uprising are addressed, and new complaints answered, resentment will continue to seethe, setting the stage for an another explosion of popular unrest down the line. 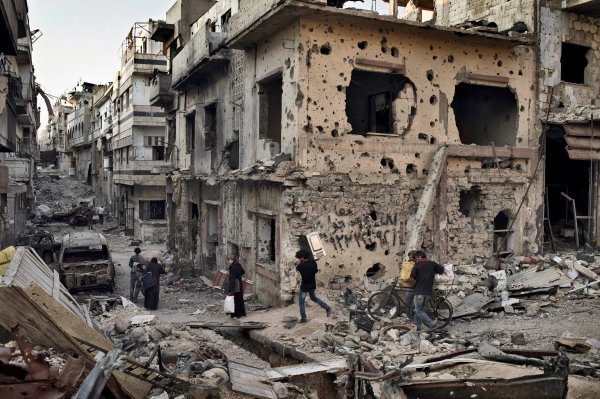 Has Assad Won?
Next Up: Editor's Pick