Mom & Me & Mom is your seventh autobiography. How many more will you write?

I’ll be celebrating my 85th birthday [on April 4]. I don’t know how much longer I’ll be around. I’ll probably be writing when the Lord says, “Maya, Maya Angelou, it’s time.”

Your mother sent you away when you were 3 and — except for a brief period with her when you were 7 and her boyfriend raped you — you didn’t see her again until you were 13. Yet this book is full of love for her. How did that happen?

I didn’t know her. I didn’t trust her. But I began to like her because she was kind. I said, “I’d like to call you Lady.” She told everybody, “Call me Lady from now on.” Amazing. And she was kind to people, all sorts of people — white ones and black ones and Spanish-speaking ones. If they needed something, my mother was the one.

You endured some really horrible things, mostly at the hands of men. Have gender relations progressed?

At 15 you were the first African-American conductor on a cable car in San Francisco. Why that job?

The women wore beautiful uniforms, and they had this change belt — click, click, click, click. I went to apply. No one would even give me an application. My mother said, “Take one of your big Russian books and sit there. I did, for two weeks — I hated it. But I didn’t want to go home and tell my mother I wasn’t woman enough. Finally, a man asked me, “Why do you want this?” I said, “I like the uniforms. I like people.” I got the job.

You’re friends with Nichelle Nichols, who most people know as Lieutenant Uhura. Did you watch Star Trek?

I loved Star Trek. I spoke to her. I spoke right to the television. “Hi, Nichelle!”

Did you inherit your mother’s fondness for guns?

Have you ever fired your weapon?

I was in my house in North Carolina. It was fall. I heard someone walking on the leaves. And somebody actually turned the knob. So I said, “Stand four feet back because I’m going to shoot now!” Boom! Boom! The police came by and said, “Ms. Angelou, the shots came from inside the house.” I said, “Well, I don’t know how that happened.”

Are you optimistic about the future of poetry?

Oh, yes. All I have to do is listen to hip-hop or some of the rappers. I listen to country-western music. I write some country music. There’s a song called “I Hope You Dance.” Incredible. I was going to write that poem; somebody beat me to it.

Your mother asked you to talk to her last husband, who wasn’t keeping up in the boudoir. How did that go?

Oh, it was terrible. It was so embarrassing. But my mother asked me to do it. She said, “He won’t take care of business. He’s afraid he’s gonna have a heart attack.” So [after she went out], I call. I said, “Papa, you say that Mom’s appetites are good.” He said, “Yes.” I said, “Now, Papa, please excuse me. But all her appetites are good. And there’s one that only you can handle.” Oh, gosh. So many white people don’t know that black people blush.

Do you have any unfinished business?

I’ve still not written as well as I want to. I want to write so that the reader in Des Moines, Iowa, in Kowloon, China, in Cape Town, South Africa, can say, “You know, that’s the truth. I wasn’t there, and I wasn’t a six-foot black girl, but that’s the truth.” 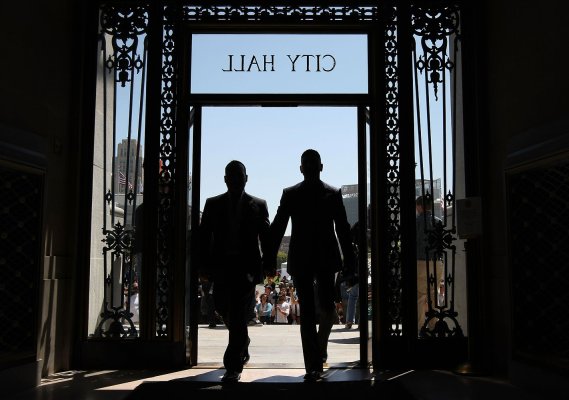 Pride and Prejudice: An Interactive Timeline of the Fight for Gay Rights
Next Up: Editor's Pick