When Maya Angelou was 16 she became not only the first black streetcar conductor in San Francisco but the first woman conductor. By the time she was 40 she had also been, in no particular order, a cook, a waitress, a madam, a prostitute, a dancer, an actress, a playwright, an editor at an English-language newspaper in Egypt, and a Calypso singer (her one album is entitled “Miss Calypso.”) It wasn’t until 1970, when she was 41, that she became an author: her first book, I Know Why the Caged Bird Sings, told the story of her life up to the age of 17. That remarkable life story ended today at the age of 86.

In her last years Angelou’s work became associated with a certain easy, commercial sentimentality—she loaned her name to a line of Hallmark cards, for example—but there was nothing easy about her beginnings. She was born Marguerite Johnson in 1928 in St. Louis, Missouri. Her parents divorced when she was 3. When she was 7 her mother’s boyfriend raped her. She testified against him in court, but before he could be sentenced he was found beaten to death in an alley. Angelou’s response to the trauma was to become virtually mute – she couldn’t, or wouldn’t, speak in public for the next 5 years. She often cited this silent period as a time when she became intimately aware of the written word.

Angelou eventually regained her voice, but her life remained chaotic. She became a mother at 17, immediately after graduating high school. She bounced from city to city, job to job and spouse to spouse (she picked up the name Angelou from one of her husbands; “Maya” was her brother’s nickname for her). She spent years living in Egypt and then in Ghana. By the time she was 40 her life story and her distinctive, charismatic way with words had her friends—among them James Baldwin—begging her to write it all down. She finally did.

In I Know Why the Caged Bird Sings Angelou describes herself as “a too-big Negro girl, with nappy black hair, broad feet and a space between her teeth that would hold a number-two pencil.” Although generations of high school students have been assigned it, the book’s unsparing account of black life in the South during the Depression, and of her sexual abuse, is not easy reading. It is Angelou’s tough, funny, lyrical voice that transforms her story from a litany of isolation and suffering into a hymn of glorious human endurance. That extraordinary voice—dense, idiosyncratic, hilarious, alive—brought novelistic techniques to the task of telling a life story, and its influence on later generations of memoirists, from Maxine Hong Kingston to Elizabeth Gilbert, is incalculable. (Angelou also mixed fact and fiction, unapologetically, long before James Frey.) The themes she expounded in Caged Bird, of suffering and self-reliance, would be braided through the rest of her long life’s work. “All my work, my life, everything is about survival,” Angelou said. “All my work is meant to say, ‘You may encounter many defeats, but you must not be defeated.’ In fact, the encountering may be the very experience which creates the vitality and the power to endure.”

I Know Why the Caged Bird Sings was nominated for a National Book Award, and it was followed by a torrent of creative output in every possible medium. Angelou wrote five more volumes of autobiography and six books of poetry. She was nominated for an Emmy for playing Kunta Kinte’s grandmother in Roots. She wrote children’s books and essays and the lyrics to a musical, King. She acted in movies and even directed one, Down in the Delta. She took to the national stage in 1993 when she read a poem, “On the Pulse of Morning,” at President Clinton’s inauguration.

Angelou’s energy was enormous and her activity incessant. Though her education stopped after high school, she held a lifetime professorship at Wake Forest and collected honorary degrees from 50 more colleges and universities. She lectured 80 times a year. From 1981 on she lived in a brick house in Winston-Salem; despite her various marriages she lived alone, and her first child was also her last. A commanding figure at 6 ft. tall, she rose at 4 or 5 every morning and went to a bare room at a nearby motel to work, alone with a stack of legal pads, a Bible, a dictionary, a thesaurus, and a bottle of sherry.

Her relentless creativity didn’t balk at her own obituary, and as usual she put it better than anyone else could have. “What I would really like said about me is that I dared to love,” Angelou told an interviewer in 1985. “By love I mean that condition in the human spirit so profound it encourages us to develop courage and build bridges, and then to trust those bridges and cross the bridges in attempts to reach other human beings.” 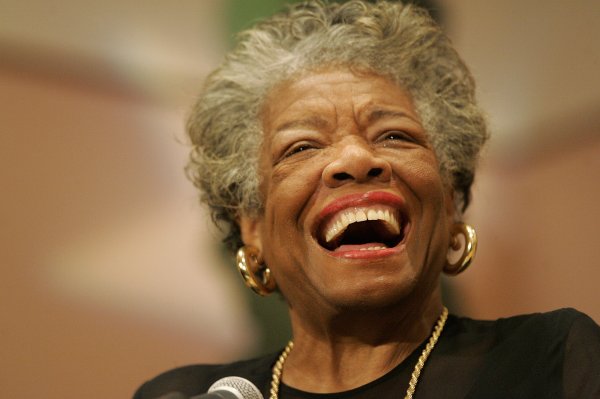