The lot of the beleaguered Palestinian militant group Hamas grew still worse on Tuesday, when an Egyptian court banned the Islamist organization and ordered confiscation of its assets inside Egypt. The ruling threatens to complete the physical isolation of the Gaza Strip, the coastal enclave that’s home to 1.6 million Palestinians and has been governed by Hamas since 2007. The Strip is already surrounded on three sides by the Israeli military – including gunboats that challenge any vessel that ventures beyond six nautical miles into the Mediterranean Sea. And now, on its western boundary, Gaza faces an Egyptian government that has officially declared the ruling party an enemy organization.

“Whoever threatens Egypt’s security should understand that there will be consequences,” Egyptian Foreign Minister Nabil Fahmy told a news conference, after learning of the ruling from a reporter’s question.

If enforced, the ruling’s implications will accelerate the descent of a Hamas already in political free-fall. Not 18 months ago, Hamas was hosting the Emir of Qatar in a state visit that served to reinforce Hamas’ credibility as a political entity. The Emir arrived from Egypt, crossing into Gaza at the international border station at Rafah, on the Strip’s western boundary. At the time, Egypt was controlled by the Muslim Brotherhood, the mothership of political Islam that had spawned Hamas and won every election in Egypt since the fall of President Hosni Mubarak in 2011.

But the military coup in July removed the President Mohamed Morsi, a Brotherhood stalwart, and Tuesday’s ruling demonstrates just how potent a force Egyptian nationalism has become in the ensuing months. Mubarak also hated Hamas, but it’s a Palestinian group and pro-forma solidarity with the Palestinians’ struggle against Israel prevented his government from doing what Egypt’s military-backed rulers have done since July 3. After blaming Hamas not only for working with Morsi, but for sheltering militants who have turned Egypt’s Sinai peninsula into a war zone, Cairo has shuttered hundreds of tunnels carrying goods and gasoline into Gaza, and threatened military action. The Rafah crossing, long Gazans’ only outlet to the world, is now often shut down, sending patients to plead for entry into Israel for medical care unavailable in the Strip.

Hamas, which has trod carefully around Egypt’s new rulers, promptly condemned the court ruling, perhaps hoping to prevent its implementation. “The decision harms the image of Egypt and its role towards the Palestinian cause. It reflects a form of standing against Palestinian resistance,” spokesman Sami Abu Zuhri told Reuters.

Besides Israel, the ruling will also likely serve to strengthen the hand of Fatah, the secular Palestinian party that was kicked out of Gaza in 2007 but governs the West Bank and its 2.5 million residents. Fatah, through the Palestinian National Authority set up by the 1994 Oslo Accords, has workaday administrative relations with Israel, and already does what Hamas cannot do in Gaza – arrange daily passage of hundreds of truckloads of goods into the enclave from Israel. Fatah’s brief may now have to extend to the Rafah crossing, in the event Egypt stops recognizing the authority of travel documents issued by Hamas. Shoring up Fatah may in fact be a goal of Egypt’s campaign against Hamas, though one obscured, as so many things are these days, by the wrath Cairo directs at anyone who can be tied to the Brotherhood that was itself banned on Christmas Day. 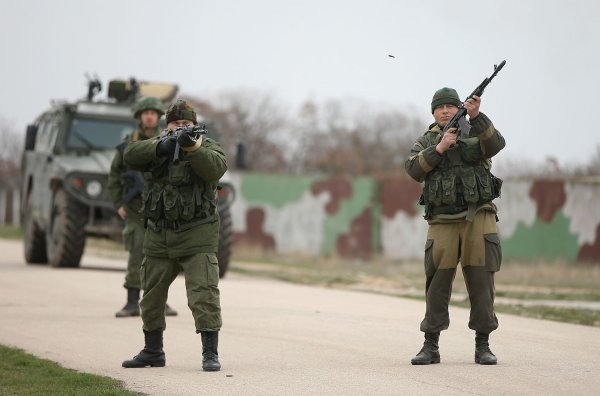 Russian and Ukrainian Troops in Tense Crimea Standoff
Next Up: Editor's Pick