An Indian drummer leads a group of women during a wedding procession in Kathputli Colony in New Delhi, June 2013. The name Kathputli Colony comes from the Hindi word for puppet, and it is an area inhabited by puppeteers, magicians, acrobats, dancers and musicians
AFP / Getty Images

The roads that lead to it are unpaved, dirty and narrow. The houses are rudimentary and sparse. The meandering alleys, slippery and narrow, are almost a hazard to navigate with an overbearing smell of sewage and wood smoke.

And yet this is where the magic happens.

Located in the western part of India’s capital, New Delhi, this slum is known as the Kathputli (or puppeteers’) Colony — though it isn’t just puppeteers who live here. With its origins in a simple encampment for roving and mostly Rajasthani performers, this 50-year-old community today comprises some 3,500 families. They are magicians, snake charmers, acrobats, singers, dancers, actors, traditional healers and musicians as well as puppeteers, and make up what it probably the largest congregation of street performers in the world. Musical instruments — for sale or repair — line the alleys, and a simple chat can turn into a magic show. Days reverberate with song and music, and many houses are crammed with huge puppets and other props.

The local authorities have plans for Kathputli Colony, however.

“Our policy is to give slum dwellers and their children better living conditions, and that’s what we are doing,” says S.K. Jain, director of the Delhi Development Authority (DDA), the civic body that owns the land where Kathputli Colony stands.

So, come April 1, this unique community will disappear to make way for luxury flats and a mall. The residents will be shifted to a nearby transit camp for two years and finally to a new high-rise building, which, the government claims, will be a modern artistes community with facilities to nurture and showcase street art.

The residents are skeptical. “How are we going to store our equipment in a cramped flat?” asks Puran Bhat, the oldest resident of the Kathputli Colony and a puppeteer, pointing at the 10-to-15-ft.-high puppets lined up against the wall of his room and spilling over onto a small terrace. “And we have big families.” (In Bhat’s case, there are 18 of them.)

“Our art dictates our lifestyle and our lifestyle is our identity; the lifestyle of a multistory building is not for us,” says Aziz Khan, a magician who made Guinness World Records for his great Indian rope trick in 1995.

Almost everyone in the Kathputli Colony shares these feelings, and many have asked that the community be redeveloped in situ, as a tourist attraction. But the DDA has other plans. “Middle-class India looks upon us as a nuisance, at odds with the image of India as a rising world power,” says Ishamuddin Khan, a street magician whose rope illusion was once ranked among the 50 greatest magic tricks in the world.

Meanwhile, Bhat, in his home, works on the script of a play that the residents are planning to perform on the streets of Delhi to protest the demolition of Kathputli Colony. “We perform for the poor as well as the rich, for the Prime Minister as well as the commoner,” Bhat says. “And we have always lived like kings without worrying about the future.”

That freedom, unfortunately, is a luxury that the residents of Kathputli Colony no longer have. 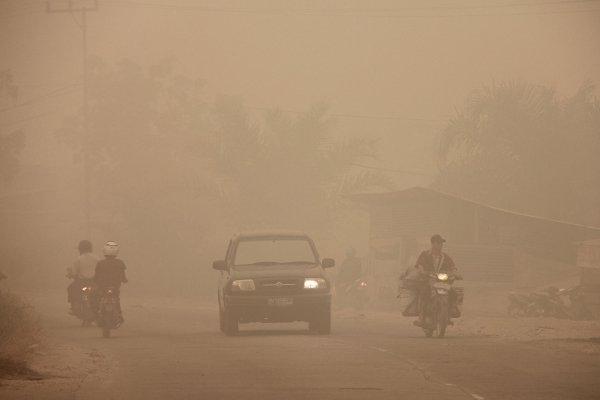 The Haze in Indonesia Has Just Made 30,000 People Sick
Next Up: Editor's Pick