Here's Why Egypt Extended Presidential Elections to a Third Day

Egyptian authorities announced a one-day extension of voting in the country’s presidential election on Tuesday in an attempt to boost low turnout in an election expected to result in a landslide for former military chief Abdul Fattah al-Sisi.

Sisi, who overthrew elected President Mohamed Morsi from power last year, had called for a high turnout in hopes of securing a political mandate. The reports of low participation threatened to undercut the credibility of Sisi’s otherwise inexorable march to the presidency. His sole challenger, left-winger Hamdeen Sabahi, came third in the 2012 election and was not expected to pose a threat to Sisi’s campaign.

But political fatigue, perceptions that the outcome was pre-determined, widespread boycotts, and scorching hot weather may yet pose a threat to Sisi’s standing; all drove down turnout in the election, which began on Monday and had been scheduled to end at 10 P.M. on Tuesday.

The last-minute extension, announced by the Presidential Election Commission, also followed several other measures intended to increase turnout. Prime Minister Ibrahim Mehleb declared Tuesday a national holiday. One member of the Election Commission claimed judges would enforce an obscure rule that imposes a 500 Egyptian pound ($70) fine for not voting without a valid excuse.

“The reports I’m seeing in terms of the turnout suggest something is not going as planned as far as the interim authorities are concerned. They certainly seem to be taken aback, and what we’re seeing is them scrambling to try and deal with that,” said Aziz El-Kaissouni, a visiting fellow at the European Council on Foreign Relations.

“A large component of that is political apathy, and a very good question is, why bother go out and vote when you know the result beforehand,” he said. “‘Why should I take several hours out of my work day, or my holiday as it may be, and stand in line in the sweltering heat when we know exactly what the outcome is?’”

In Cairo on Tuesday, some polling stations bustled with voters. Others were deserted. A half hour after the polls opened in a school in Giza, a single man stood in the voting booth. The judge in charge of the room gestured with a pen toward the ballot box. Only about 600 of the district’s approximately 4,000 registered voters had participated so far. “It’s still early,” he said.

In the neighborhood of Imbaba, historically a redoubt of Islamism and political opposition, a steady trickle of voters came and went from two polling places. At one school, the judge descended to the courtyard to help a 100-year-old woman who could not climb the stairs to the voting booths. “Do you want Sisi or Sabahi?” he asked. The woman pointed to Sisi.

The overwhelming majority of voters interviewed expressed support for Sisi. Alia Mohamed, 23, an elementary school teacher said she backed the former army chief. “Honestly, he’s the best person to hold the country.” Some people in her neighborhood opposed Sisi, she said, “but they’re sitting at home.”

On Tuesday evening, as the heat began to ease, turnout picked up at a large school in another section of Giza, a hub for four different electoral districts. A row of armored personnel carriers lined the street outside. A small crowd waving Egyptian flags, and a few Sisi posters, rallied outside the entrance. Speakers pumped patriotic music. Armed soldiers and police, some wearing black face-masks, guarded the demonstration.

A small but vocal minority of voters expressed support for Sabahi. In upscale Mohandessin, a woman who declined to give her name due to an institutional affiliation, said she voted for Sisi’s rival “just to make a point that it was not a landslide.” She said she was skeptical of Sisi. “That’s not what people died for three years ago,” she said, referring to the 2011 uprising that ended the 30-year autocratic rule of president Hosni Mubarak.

Among Sisi’s supporters, jitters about low turnout spilled over on Monday night’s talk shows, with several hosts angrily condemning voters for lackluster participation. “I’m willing to cut my veins for the country right now on air for people to go down and vote,” said an anchor on the show Al Qahera Al Youm.

“Egypt is entering a phase of authoritarian restoration that’s not simply Mubarak 2.0. Mubarak inherited power from Sadat in a relatively smooth transition, with no serious rivals or an upsurge from below,” said Mona El-Ghobashy, a political scientist at Barnard and expert on Egyptian politics. “Sisi takes the reins in a far more challenging political environment.”

“Unlike Mubarak, he’s keen to organize periodic mass spectacles endorsing his person and his policies, to appropriate and channel the authentic mass mobilization made possible by the uprising,” she said. “But as the embarrassingly low turnout for the elections shows, there are limits to how much Sisi can script mass public support. Even his core constituency will tire of being trotted out every few months to perform its adoration, absent an improvement in daily life conditions.” 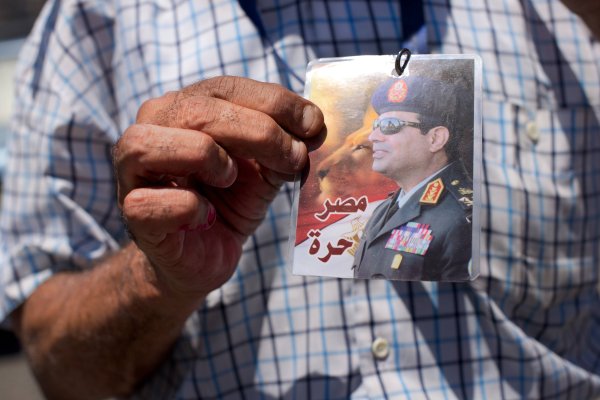 Egypt Votes in Anticipation of al-Sisi Victory
Next Up: Editor's Pick