Entertainment titan Disney and satellite giant Dish Network have struck a major distribution deal that paves the way for Mouse House video content — including ABC and ESPN — to be delivered to consumers as part of a new Dish Internet offering, the two companies announced late Monday. As part of the deal, Dish has agreed to scale back its AutoHop DVR ad-skipping technology, which has been the subject of a closely watched legal battle between the satellite network and the major broadcasters.

The agreement marks of the culmination of months of negotiations between the two companies. It represents a significant coup for Dish Chairman Charlie Ergen, who jumps to the front of the pack in the race to deliver so-called “over the top” TV programming that’s accessible via the Internet on a range of devices, including smartphones, tablets, gaming consoles and old-fashioned televisions. Financial terms were not disclosed.

The deal positions Dish to introduce a new Internet-based service that incorporates the various Disney content offerings, although it’s unclear when such a service will launch. With the Disney deal in hand, Dish could now seek to strike similar agreements with other programming giants, including 21st Century Fox, which owns FOX; Comcast, which owns NBC; and CBS.

Anne Sweeney, Co-Chairman, Disney Media Networks, and President, Disney/ABC Television Group, called the agreement “one of the most complex and comprehensive we’ve ever undertaken.” She added. “Not only were innovative business solutions reached on complicated current issues, we also planned for the evolution of our industry.” John Skipper, President, ESPN & Co-Chairman, Disney Media Networks, said: “We worked with Dish to smartly address the future of the multi-screen world on several levels.”

The agreement is sure to be greeted warmly by sports fans who subscribe to Dish’s satellite service. As part of the deal, Dish will make available ESPN Goal Line, ESPN Buzzer Beater, as well as Longhorn Network and the upcoming SEC ESPN Network upon its launch, the two companies said. In addition, Dish, ESPN and ESPN Deportes customers will have access to the live and video-on-demand channel ESPN3. Dish will also launch ESPNEWS and ESPNU in high-definition, and ESPN Classic will be reintroduced as a video-on-demand channel.

“The creation of this agreement has really been about predicting the future of television with a visionary and forward-leaning partner,” said Joseph P. Clayton, Dish chief executive officer and president, said in a statement. “Not only will the exceptional Disney, ABC, ESPN entertainment portfolio continue to delight our customers today, but we have a model from which to deliver exciting new services tomorrow.”

The agreement also includes the renewal of retransmission rights, allowing Dish to continue to carry ABC and ESPN on its satellite network. The previous agreement expired last fall, and Dish and Disney have been working behind the scenes to craft a new arrangement, in hopes of avoiding an acrimonious spat like the one between CBS and Time Warner Cable that caused CBS and Showtime to be blacked out for millions of Time Warner Cable subscribers late last summer.

As part of the agreement, Dish will disable AutoHop functionality — which allows viewers to skip ads on ABC shows that they’ve recorded — for three days following the initial broadcast. That feature had been at the center of a contentious legal dispute between Dish and the major broadcasters, which felt that AutoHop threatened their advertising revenue and charged that the service violated copyright law. All pending litigation between Disney and Dish over AutoHop has now been dismissed as part of the pact, the two companies said.

John Bergmayer, Senior Staff Attorney at Public Knowledge, a DC-based digital rights group that has long argued that AutoHop is a legal technology, said he was disappointed that the service became a bargaining chip as part of a broader financial deal. “If Disney and Dish want to come to a distribution agreement where Dish agrees to disable legal features on its DVR, that’s a commercial matter between the two companies,” Bergmayer said. “But it’s unfortunate that Disney or any company would want to take away the flexibility that viewers are legally entitled to in their own homes.” 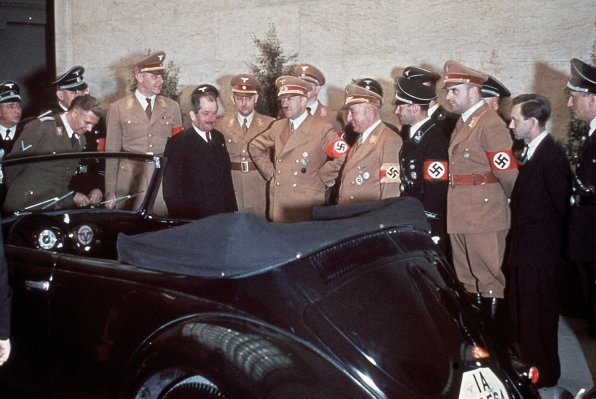 Hitler at 50: Color Photos From a Despot's Garish Birthday Bash
Next Up: Editor's Pick