Oscar statuettes are displayed on Jan. 23, 2004, at the Museum of Science and Industry in Chicago, Illinois
Tim Boyle—Getty Images
By Lily Rothman

At last night’s Oscars ceremony, the unspoken winner was Twitter — and the winner of Twitter was Oscars host Ellen DeGeneres.

Even if her sunny take on the Academy Awards got some critical demerits for being bland, social-media data put together by the research company Fizziology shows that Twitter conversation about DeGeneres’ hosting gig was pretty unanimously (as in 99%) positive, and her opening monologue scored marks nearly that high. Basically, nobody had anything bad to say about her — or if they did, they kept their comments to themselves.

On the other hand, those who did like her and her stunts were very vocal: more than three-quarters of all the people tweeting about the Oscars during the broadcast were talking about her record-breaking selfie — and the volume of conversation jumped 3,000% in the selfie-centric moments around 10:00 pm. (The second-most-vocal group was comprised of people who thought Leonardo DiCaprio should have won.)

Meanwhile, over at Google, people who wondered how many times he’s been nominated (answer: this year makes four acting nods) made that question one of the most-asked Oscars-related queries during the broadcast. The only ones that were more popular than that were:

So, to save time for those of you who haven’t joined the searching hordes yet, here are your answers: Kim Novak, of Vertigo fame; X-Men co-star Nicholas Hoult; “Spring,” says TVLine.com; and a real HIV-positive Texan man who smuggled experimental drugs into the U.S. for AIDS patients. 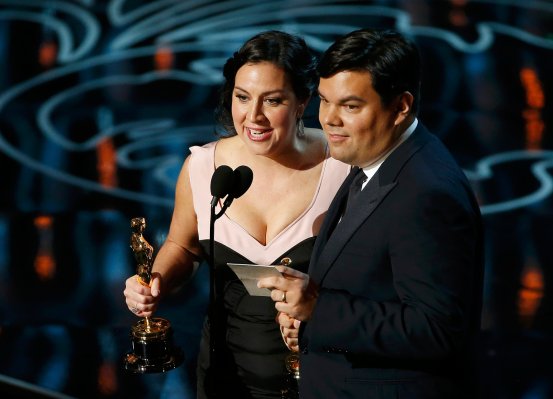 Oscars 2014: Inside the Rhyming "Let It Go" Acceptance Speech and 'Frozen 2'
Next Up: Editor's Pick