Why 'Global Warming' Is Scarier Than 'Climate Change'

A quick check of the TIME.com archives reveals that I’ve used the term “global warming” in 545 posts, videos and articles—not counting this one. And the term “climate change”? 852 times. That’s not surprising. While the two terms are largely synonymous—which is why there are 472 posts where I use both—”climate change” has become the preferred term for scientists because it better describes the long-term changes in the planet’s climate, which go well beyond simple temperature increase. Scientists use it, and so have I, but most of the time I simply rotate the two terms for variety’s sake.

That last bit is especially important. As the report’s authors note, some environmentalists have come to think “climate change” is a more effective term to use with Republicans, precisely because it doesn’t seem as catastrophic as “global warming.” (If there’s one thing conservative climate skeptics like to argue, it’s that environmentalists are constantly overstating the threat of climate change.) But the Yale report found that Republicans don’t really care which term is used, though “global warming” will sometimes generate stronger negative feelings among conservatives. Not that it much matters—a recent Gallup poll found that 65% of conservatives said they were skeptical of climate change, compared to just 24% of moderates and 9% of liberals.

But the Yale report also found that the term “global warming” actually seemed to reduce engagement with Democrats, independents, liberals and moderates:

Scientists take great pride in the precision of their language, sometimes to the point of jargon-filled incomprehensibility. But language matters in politics, too. Just look at the difference between estate tax and death tax, two terms that refer to the same legal act—taxing wealth left over after a citizen dies—and yet connote two entirely different things. The difference between global warming and climate change isn’t that large yet, but environmentalists who want to nudge as much of the public as possible towards action should be careful which one they use. 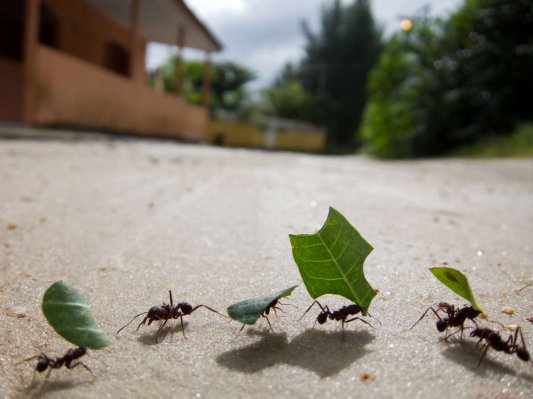 Your Ant Farm Is Smarter Than Google
Next Up: Editor's Pick