Unless you’ve been hiding under a rock with no media access for the last month, you’ll be well aware that former First Lady, former Secretary of State and the once-and-potentially-future presidential candidate Hillary Clinton has a book coming out next month.

Vogue readers got a first glimpse of Hard Choices in Mother’s Day excerpts which drummed up a million advance purchases of the book, but Clinton revealed more about the memoir in an author’s note on Tuesday. In it, she explores her reasons for wanting to write her eleventh tome — if you count some of her more academic early offerings — this one on her tenure as Secretary of State.

But the sneak peak doesn’t give away much about what the book actually contains — and what was included is hardly surprising. Here are five key things she was either bound to mention, or decided to skip:

The book is called Hard Choices, she says, because of all the hard choices in life that make us who we are, whether that’s a parent, a politician or a world leader. Though she mentions the choice of “whether to get married—or stay married,” she avoids mention of a certain former White House intern who made waves with an interview of her own this month, Monica Lewinsky. And, anyway, the book is about Clinton’s time as secretary of state, so despite referencing her early choices in life in the tease, she quickly moves on to focus on her choices in office.

Not unsurprisingly, the lead choice is the decision to kill Osama bin Laden, which Clinton pushed for behind the scenes. Given its prominence in the teaser, it would seem this will be her top hard choice—and a very successful one at that—in her book.

Some of Clinton’s less successful hard choices go unmentioned, including her response to the attack in Benghazi, Libya that claimed the lives of Amb. Chris Stevens and two other Americans. She does mention some regrets, though. “As is usually the case with the benefit of hindsight, I wish we could go back and revisit certain choices,” she says. We’ll all have to wait until the book’s release on June 10 to find out what those choices were.

4. Mentioned: Hatred for the press

In recent weeks much has been written about Clinton’s potential 2016 bid, including the fact her biggest hitch is having to deal with the media she loathes. That comes through in her teaser.

For anyone hoping and dreaming that Clinton will run for president in 2016, she gives yet another vague hint that she’s leaning that way. She signs off the letter: “One thing that has never been a hard choice for me is serving our country. It has been the greatest honor of my life.” So, perhaps the choice to serve again isn’t so agonizing after all? 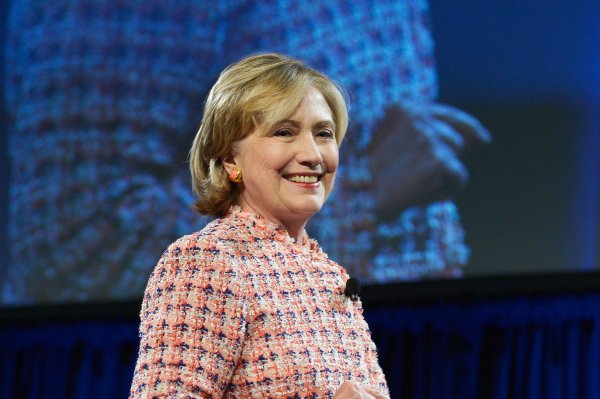 These Were Hillary Clinton's Options For a Different Book Title
Next Up: Editor's Pick