Obama Says 'Time to Turn The Page' on Afghanistan War

President Barack Obama speaks about the military troop pullout from Afghanistan at the White House on May 27, 2014 in Washington, DC.
Alex Wong—Getty Images
By Zeke J Miller

President Barack Obama announced plans Tuesday to leave a force of 9,800 American troops in Afghanistan after this year and withdraw all American troops by the end of 2016, as he winds down the nation’s longest war.

“The bottom line is, it’s time to turn the page on a decade in which so much of our foreign policy was focused on the wars in Afghanistan and Iraq,” Obama said at the White House.

Coming on the heels of a Memorial Day weekend trip to visit troops in Afghanistan, and a day before a major foreign policy address at West Point, Obama’s announcement didn’t come as a surprise. Pentagon officials had recommended to the President either a force of this size or a full withdrawal at the end of the year.

“I think Americans have learned that it’s harder to end wars than it is to begin them,” Obama said, hinting at his broader foreign policy philosophy set to be outlined Wednesday. “Yet this is how wars end in the 21st century, not through signing ceremonies but through decisive blows against our adversaries, transitions to elected governments, security forces who are trained to take the lead and ultimately full responsibility.”

The remaining forces will have a pared back mission focused on counterterrorism and training Afghan security forces. Outgoing Afghan President Hamid Karzai has yet to sign a Bilateral Security Agreement, which would provide legal protections for U.S. troops and is viewed as a prerequisite for any lingering American troop presence, but both of the candidates to replace him have pledged to sign the agreement if they take office.

“We have struck significant blows against al-Qaeda’s leadership, we have eliminated Osama bin Laden, and we have prevented Afghanistan from being used for attacks against our homeland,” Obama said. “Now we’re finishing the job we started.”

Addressing critics who assert the U.S. withdrawal timetable is too aggressive, Obama said, “We have to recognize Afghanistan will not be a perfect place, and it’s not the U.S.’s responsibility to make it one.”

Speaking from the Rose Garden, Obama told reporters that U.S. troops won’t stay in the country without a Bilateral Security Agreement. On a call with reporters, a senior administration official defended Obama’s decision to announce a firm timeline for withdrawal, saying it is important to set a schedule for troop drawdowns for planning with allies and the Afghan government.

Speaking at a Memorial Day ceremony at Arlington National Cemetery on Monday, Obama said that, “By the end of this year, our war in Afghanistan will finally come to an end.”

Ending the U.S. troop presence would fulfill Obama’s pledge when he took office to end the war. In 2009, he ordered a 30,000 troop “surge” to help bring stability to the war-torn country, while enacting a plan to gradually turn over security responsibilities to Afghan forces. As of this month there are roughly 32,800 U.S. troops in Afghanistan. 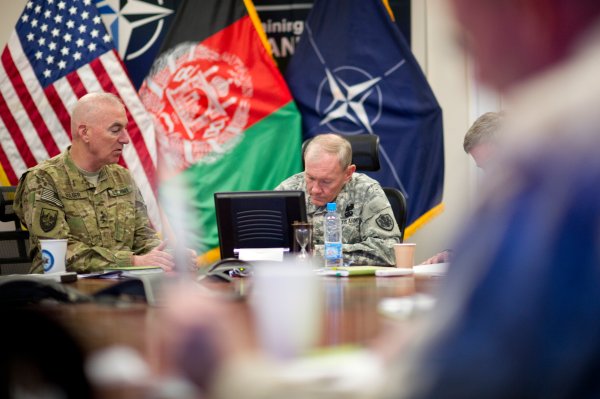 A General on Why We Lost the Wars in Afghanistan and Iraq
Next Up: Editor's Pick