Hannah’s turning 25, which means we should probably start questioning when the show’s name will become inappropriate. (Women doesn’t quite have the same ring.) Fortunately, the characters in Girls are adults in law only. As Shoshanna so sensitively puts it this episode, “It’s really amazing that you all have accomplished so little since college.”

While this Girls episode was not as laugh-out-loud funny as the last one — the excellent road trip episode — it does set up some promising story lines for the rest of season.

The episode begins with Hannah cutting Adam’s hair — she’s much better at it when she’s not having a mental breakdown, she promises. Adam’s sister, Caroline, calls. She’s just been dumped by a guy with a bunch of pets who possibly hit her (that horrifying pattern of bruises on her thigh is sign number one that this episode isn’t going to end on a happy note). Even though Adam and Hannah have a spare bedroom, Adam doesn’t want his sister to stay because she’s crazy. And if Adam thinks she’s crazy, that’s saying something.

Cut to Marnie’s hilarious music video. Marnie decided that she was going to pursue a music career last season, and her horribly uncomfortable performance at Adam’s office party is still seared in my memory. This music video may top that in awkwardness, which is why she’s screaming at someone working at YouTube to take it down.

All the characters converge at Hannah’s birthday party. Some highlights from the evening: Adam’s sister bites Ray’s arm when he won’t dance with her; Ray befriends a man only to find out he’s at the bar to pursue Ray’s ex, Shoshanna (bummer); Ray tells Shoshanna he doesn’t want to be friends; Shoshanna can’t stand in her heels; Hannah’s editor, David, shows up to the party drunk and downloads Grindr on Hannah’s phone — “just temporarily.”

The arrival of David reminds us that Hannah actually has some pretty supportive friends. Yes, they have major flaws (drug addictions, cattiness, ditziness, etc.), but they are presumably allowing Hannah to use stories from their lives in her soon-to-be published e-book. Marnie introduces herself, “I’m Marnie Michaels. I’m prominently featured in many of Hannah’s essays.” If she’s embarrassed by a YouTube video, Marnie’s making a real sacrifice by allowing Hannah to publish her embarrassing moments.

Or perhaps it’s a bid for attention, which seems to be Marnie’s new thing. For example, in this episode Marnie corners Hannah into joining her on the stage to sing a song from Rent, much to Hannah’s horror.

Luckily, the performance is quickly interrupted by a fight that breaks out between Ray and David. David, it seems, has asked the DJ to switch from Ray’s requested song to “Sexy and I Know It” by LMFAO. Ray yells, “It’s not fair to end things in the middle. Do you understand the concept of the queue? It’s the only thing separating us from the animals.” Hmmm, I think this may be about his relationship Shoshanna, cut short too soon. The two get into a fight, and David kicks Ray’s butt. Ray’s boss is sick, his ex is being pursed by handsome men and now he has a bloody nose. Rough day for Ray.

Walking home, Adam gives Hannah her birthday present: his tooth on a necklace. “It might be my sister’s because our parents kept them in the same box,” he explains. “But it’s definitely my genetic material.” She loves it. They’re officially the weirdest couple on television, but it’s kind of romantic, right?

After kissing and cuddling, Hannah and Adam head home only for Hannah to open the bathroom door and find Adam’s sister standing there. Hannah screams. Caroline squeezes a glass in her hand until it shatters. It looks like the honeymoon period of dating is over for Hannah and Adam.

To Adam, after Caroline hurts herself in their bathroom: “Do you still want to have sex?

After Hannah’s mom compliments Hannah on how pretty she looks at her birthday party: “I keep telling her she can look like this every day if she wanted.” Ouch.

“Hey, hottie. Do you know where I can find some dank weed?” — what Shoshanna apparently yells at strangers on the street.

Nothing! Why even have Jessa in the episode if you’re not going to give her any lines? More Jessa please! 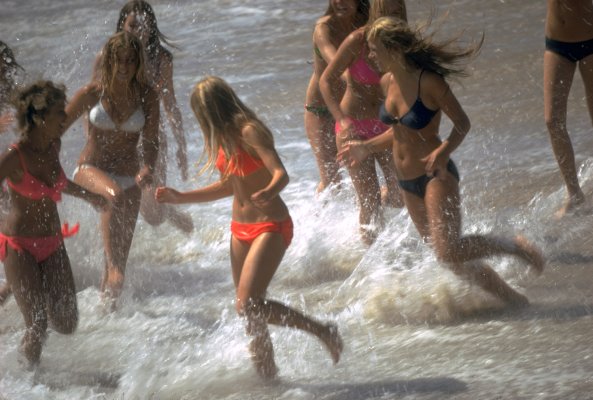 See the LIFE Version of the Swimsuit Issue
Next Up: Editor's Pick