Ellen DeGeneres onstage during the Oscars at the Dolby Theatre on March 2, 2014 in Hollywood, California.
Kevin Winter—Getty Images
By Eliana Dockterman

Sunday night’s Oscars scored 43 million viewers this year — up 2.5 million from last year, according to Nielsen ratings — meaning that Ellen DeGeneres courted the most viewers since Billy Crystal in 2004.

Only NFL playoff games have earned comparable viewership numbers in recent years. The Oscars telecast was the biggest non-sports audience on network television since the 2004 season finale of Friends.

It turns out the awards show is better off erring on the bland side than when they stir up controversy. A wider audience tuned into DeGeneres’ unexciting but fun hosting stint than Seth MacFarlene’s boob-gate Oscars last year, which earned only 40.4 million viewers.

DeGeneres and her writers stayed mostly on the safe side with her jokes, opting for a long bit in which the host distributed pizza to Hollywood starlets over, say, jabs at Leonardo DiCaprio about his sex life. The harshest stab went to Liza Minnelli: “And I have to say, one of the most amazing Liza Minnelli impersonators I have seen in my entire life,” DeGeneres said, as the camera showed the real Minnelli in the crowd. “Good job, sir.”

This year’s show even stayed steady in the finicky 18-49 demographic with a 12.9, down from 13.0 last year — either thanks to or in spite of the incessant Twitter and selfie jokes. Hashtag blessed. 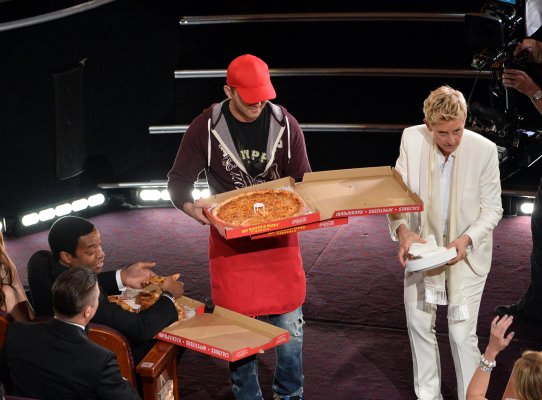