Most sex education messages in the U.S. go to great pains to elide one basic truth: that sex can be an incredible, pleasurable experience. In theory, that’s to avoid encouraging young people to have sex, but what it does in practice is deprive us all of the expectation that sex should be great. And increase the odds that the sex we do have will live down to those suppressed expectations. When we don’t expect sex to be a mutually satisfying experience shared by two people, it leaves us vulnerable to some truly poisonous alternative ideas, including the stubborn myth that sex is a precious commodity that men acquire from women.

Under this paradigm, women’s bodies are a means to an end for men, whether that end is physical gratification, validation of their masculinity, or both. For women, that means that sex may be about us, but it’s not for us. When you cut pleasure out of the sex ed equation, you cut out women’s humanity as well: if we sleep with men we’re sluts who are “asking for” sexual assault, and if we say no we’re cruel bitches, a crime which Elliot Rodger, the young man who murdered six people in Santa Barbara last Friday, and his ilk, see as punishable by death.

And that’s why, in the wake of this particular massacre, it’s time to talk about sex.

Yes, I know the gunman appears to have struggled with mental health issues and most people with mental health problems don’t ever hurt anyone. But this tragedy shouldn’t be written off as the isolated outburst of a madman. While Rodger’s killing spree was extreme and his situation unique, we should note that he’s hardly the first man to respond to sexual rejection with violence against women. He’s not even the first (or last) one to do so this month.

So yeah, it’s time to talk about sex, because, judging from his videos, Rodger was obsessed with “getting” it. That verb right there, the one in quotes, is key. His last words before the rampage weren’t about the desire to experience sexual intimacy with another, equally human person. His rage erupted in part because he was “refused” something he felt innately entitled to: namely, the bodies of women.

As someone who spends a lot of time with college students discussing their sexual attitudes, none of that surprises me. It’s just an extension of the constant message men receive that they’re only men if they can “get some,” and equally ubiquitous warnings to women about the dangers of “giving it up” without a real commitment, because (we’re told) our sexual purity is the most valuable thing we have.

Those messages are at the heart of the misogynist web sites Rodger frequented, and they’re all over Rodger’s videos and the screed he left behind. But they’re also embedded in the way most of us learn about sex, whether from church, media, or school-based sex education.

It doesn’t have to be this way. Let’s take a deep breath and tell young people the whole truth about sex, not just the scary parts. Shifting emphasis from how much sex we “get” or “give up” to instead emphasize the quality and context of our sexual encounters will pay dividends for everyone, even the majority of us who would never hurt someone else. When we truly show up for our partners, we become better lovers. When we’re free to decide when and how we want to be sexual with someone else, regardless of our gender, we’re free to more fully enjoy the sex we do have. When we stop treating sex like an accomplishment and start approaching it as a creative, collaborative encounter with a fellow human being, we learn to expect more satisfaction from our sex lives, and we increase our odds of getting it.

Obviously, it wasn’t the sexual culture alone that drove Rodger to kill. Most of us who are exposed to these damaging messages don’t stockpile weapons, let alone loose them on our community. But Rodger himself was pretty clear that his beliefs about women and sex were a big part of the fuel that caught fire inside of him. And it didn’t have to be that way.

What if instead young men like Rodger could grow up learning that sex is about communication, not consumption, and that being a man has nothing to do with your number. What if we all learned take care of each other during sex rather than taking advantage? We’d find ourselves in a world that doesn’t shame women (or men) for either being sexual or declining to be sexual, because the important thing is that we’re free to decide what works for us.

It’s scary to propose changes to the sexual culture. But ask yourself this: when the current paradigm leads to an epidemic of sexual assault, and to men who don’t “get” the women they want gunning down strangers in the street, who is being protected by the status quo? Of course no changes to sex education will prevent people from feeling the sting of rejection. It can be immensely painful to feel shut out of such a basic and profound human experience. But when we talk frankly about sex, we can better prepare everyone to navigate the downs as well as the ups. Besides vanishingly few sexually-rejected women hurt another person over it. The kind of violence we saw in Santa Barbara comes not from simple pain but from the toxic combination of pain and the belief that one is entitled to be free of that pain, even when that freedom costs others their lives. And that’s something we can — and must — change. 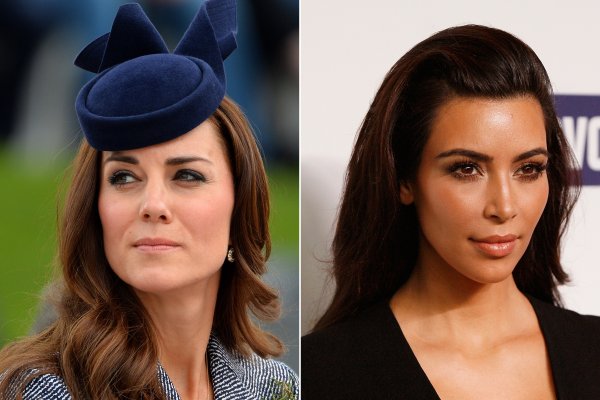 German Tabloid Brings Kim and Kate Together With Some Bum Photos
Next Up: Editor's Pick