Would the Oscars Have Loved Lana Del Rey If She Wasn't So Young and Beautiful?

Pop music fans are always quick to go to bat for their favorite artists, whether or not it’s justified — but the outrage was well-earned when Lana Del Rey’s “Young and Beautiful” was passed over for an Oscar nomination this year.

And yet, the aching, wistful ballad, used as the theme song for Baz Luhrmann’s 2013 film adaptation of The Great Gatsby, wasn’t just snubbed for a Best Original Song nod at the 86th Academy Awards — it may have been legitimately sabotaged. So what happened?

When the song first premiered last May, reactions ranged from contempt (Rolling Stone‘s Jody Rosen called it “a drag”) to praise (“a sweeping epic,” Entertainment Weekly declared). And despite Del Rey’s polarizing position in pop culture — she’s either considered an inauthentic construct cooked up in major label board meetings or The Most Beautiful Poet In The Land Of Gods & Monsters — the general consensus remained more or less the same: “Young and Beautiful” was the most quintessentially Lana Del Rey song that Lana Del Rey had ever recorded.

The song soon went on to become Del Rey’s most commercially successful song since her October 2011 debut “Video Games,” rising to an all-time peak of #22 on the Billboard Hot 100. (She would later shatter that record with Born To Die‘s “Summertime Sadness,” thanks in large part to a club-ready remix by EDM maestro Cedric Gervais.)

It’s no surprise, then, that the song was met with Oscar buzz. But by the time the nomination window came rolling around toward the end of 2013, “Young and Beautiful” was already mired in scandal.

According to a Deadline report from December, an anonymous envelope was “mailed to various members of the Academy’s music selection committee,” which included a print-out of a fake Variety web article alleging that Lana’s song was somehow ineligible for the Best Song nomination due to “a technicality involving The Great Gatsby‘s changed release date.” Upon further investigation, Academy members realized that the article was in fact doctored. (Stop me if you’ve already seen this plot play out in a Hitchcock flick — or maybe Clue.)

By the time nominations were announced, the damage may already have been done: The song was left off of the final list of nominees — even after a second controversy swept the category. (Yes, really.)

Upon the announcement of the official nominees in mid-January, one song in particular stuck out as a fairly unusual entry: Composer Bruce Broughton’s “Alone Yet Not Alone,” the title track of a small, independent Christian film, which brought in less than $150,000 at the box office.

By the end of the month, the curiously below-the-radar selection had been pulled from the category — which has happened a mere handful of times in the history of the Academy Awards. So why was it removed? Because of an e-mail reportedly sent from Broughton to 70 members of the Academy, politely encouraging them to consider his song for the nomination. But the message alone wasn’t enough to cost the song the nomination: It was the fact that Broughton is an executive committee member of the music branch of the Academy, and previously acted as an Academy governor up until 2012. As a result, his influence on voters was called into question.

Regardless of whether or not the Academy was right in pulling Broughton’s nomination, the fact remains that “Young and Beautiful” sat there in silence, shedding a lone, glamorous tear while a battle of technicalities raged on in front of her innocent eyes.

You could blame the mystery envelope, which could have come from any number of nominees, or perhaps a nefarious pop star rival vying for the nomination from the same soundtrack — et tu, Fergie? (Kidding!) You could blame the subtle shades of insider trading that led to the eventual disqualification of one entry. Or just blame the fact that the Great Gatsby producers decided to throw five (5!) songs up for nomination from its own soundtrack. But whatever the reason, Lana was ruthlessly, sincerely snubbed.

It’s not that the song would have stood much of a chance for victory, to be fair: Judging by the general response from the public, Frozen‘s ubiquitous “Let It Go” (the soundtrack from which it hails has hit #1 on the Billboard 200 5 times this year) and Pharrell’s inescapable-yet-undeniably-infectious Despicable Me 2 theme “Happy” (which just hit #1 on the Billboard Hot 100 this week) are the most likely victors in the category. But Lana deserved the recognition. (Hey, at least the Satellite Awards had the decency to award Lana for Best Original Song.)

Moreover, Lana’s far too busy putting the finishing touches on her Born To Die follow-up Ultraviolence with The Black Keys’ Dan Auerbach (among other rumored collaborators) to be bothered about some award, anyway. (It would have been nice to see her work the red carpet in some gorgeous gown — but I digress.)

There’s only one question that remains when it comes to Lana Del Rey: Will you still love her when she’s no longer snubbed and ineligible? 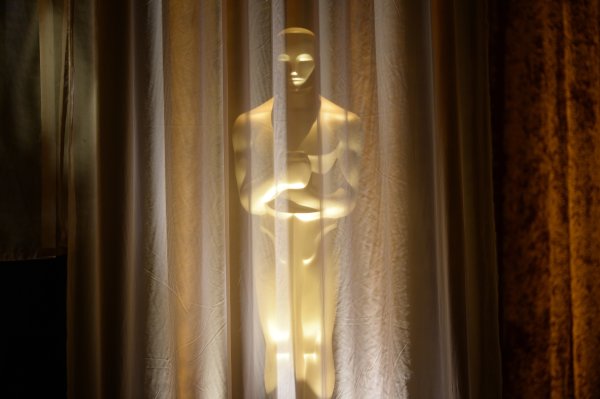 Everything You Need to Know About the 2014 Oscars
Next Up: Editor's Pick