Chinese police investigators inspect the scene of an attack at the railway station in Kunming, southwest China's Yunnan province, on March 2, 2014
AFP/Getty Images
By Hannah Beech

A mass-terrorism spree in a southwestern Chinese city that killed at least 29 people was carried out by assailants from the northwestern region of Xinjiang, which is home to the Uighur ethnic minority, according to China’s official news service, Xinhua. Knife-wielding attackers, dressed in black clothes, stormed the railway station of provincial capital Kunming shortly after 9 p.m. on March 1, slaughtering those who could not flee fast enough. More than 130 were also wounded, said Xinhua. Photos circulating on social media showed images of smears of blood and scattered luggage from terrified railway passengers. Xinhua described the assault as an “organized, premeditated, violent terrorist attack.” The state news service said that five of the at least 10 attackers had been shot dead by security forces.

The horrific event is now being dubbed 3-01, as in March 1, in an echo of what other terrorist attacks in the U.S. and Britain were called. Chinese have flocked to social-media platforms to express shock at the carnage, in which children and elderly were targeted by the assailants. In an article headlined, “Nothing justified civilian slaughter in China’s ‘9-11,’” the Global Times, a Beijing daily, wrote. “A nationwide outrage has been stirred. Justice needs to be done and terrorists should be punished with iron fists.”

If Uighurs did carry out the attack, the Kunming bloodshed marks a chilling escalation in a struggle for autonomy and even separation from the Chinese state. Members of a Turkic ethnic minority who look very different from China’s Han majority, Uighurs are concentrated in the arid region of Xinjiang, which borders Central Asia. While the Tibetan campaign for autonomy gets more international attention, Muslim Uighurs have also agitated against what they say are decades of institutionalized repression, such as limits on worship and career opportunities.

That resistance movement may be radicalizing. Over the past year, violent clashes between Uighurs and Chinese security forces have proliferated, with at least 100 people killed. But it is hard to determine the catalyst for some of these deadly incidents. Chinese state media say Muslim terrorists orchestrated attacks on police stations and other symbols of the state. Meanwhile, Uighur exile groups claim security forces have indiscriminately opened fire, using a purported war on separatist jihadis to execute innocent civilians.

What’s clear is that violence appears to be metastasizing beyond Xinjiang’s borders. Last October, a car plowed through crowds in Beijing’s Tiananmen Square, China’s symbolic heart, killing two tourists. Chinese police said the occupants of the vehicle, who also died in what was described as a suicide attack, were a Uighur man, his wife and his mother. China’s security czar said that the crash was the work of the East Turkestan Islamic Movement and state media reported that separatist banners were found inside the SUV. (Some exiled Uighurs wondered how radical paraphernalia could be discovered in a burned-out vehicle.)

(MORE: China Government: A Deadly Fireball in Tiananmen Is No Big Deal)

The Uighur narrative tells of an ancient land called East Turkestan, part of which they say was briefly independent last century before Chinese troops marched in. Kashgar, the fabled Silk Road oasis in western Xinjiang, is closer to Istanbul than to Beijing. Parts of Xinjiang are still home to camel caravans and bazaars selling apricots and fragrant spices. Yet Xinjiang must officially hew to a Beijing time zone, one of many impositions by the state that rankle Uighurs. A flood of migrants from China’s Han ethnic majority, many working for state-owned natural-resource companies or military-linked firms, has remade the ethnic makeup of Xinjiang. Official statistics show that Uighurs are now a minority in their own homeland, making up some 45% of the population.

The Chinese government counters that they have helped to raise living standards in Xinjiang, which is blessed with significant energy reserves. Kashgar, for instance, is being refashioned from a warren of mud-brick buildings into a Chinese city with high-rises and gleaming shopping malls. Uighurs, like other ethnic minorities, are exempt from China’s one-child policy, earning them the envy of some Han. Terrorist attacks will certainly not add sympathy to any separatist cause.

China’s President Xi Jinping has responded to the Saturday violence in Kunming, the capital of Yunnan province, with resolve. “Severely punish in accordance with the law the violent terrorists and resolutely crack down on those who have been swollen with arrogance,” he said, according to Xinhua. “Understand the serious and complex nation of combating terrorism. Go all out to maintain social stability.” Although the terrorist attack was generating intense interest on Chinese social media, state censors were rapidly deleting posts on the subject. On Wednesday, an annual meeting of China’s legislature is set to begin in Beijing, the biggest political event of the year. Security, one imagines, will be extraordinarily tight. 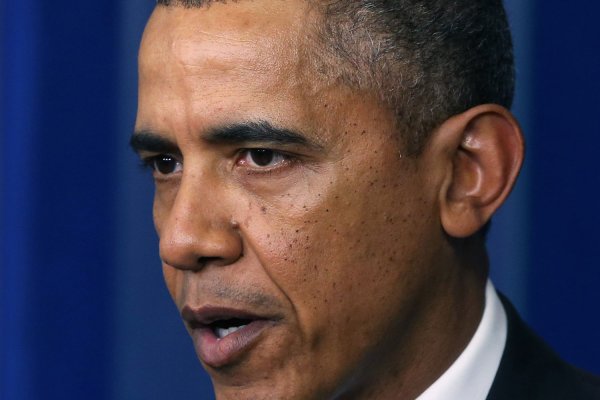 U.S. Slams Russia on Ukraine
Next Up: Editor's Pick