Famed boxer Floyd Mayweather Jr. exchanged blows with rapper T.I. over the weekend at a Fat Burger on the Las Vegas strip.

Sunday morning’s fight, which was sparked by a photo the boxing champ had taken with T.I.’s wife, reportedly included throwing chairs and punches, TMZ reports.

In the May 5 Instagram post, T.I.’s wife, Tameka “Tiny” Cottle, posed with Mayweather and wrote “You already know!!! There’s nothing like being surrounded by ‘THE BEST EVER!!! Champion sh*t.” She tagged Floyd Mayweather in the picture and included the hashtag #teammayweather.

Mayweather denied having any inappropriate contact with Cottle in an interview with celebrity blogger Necole Bitchie. “I’ve never slept with her. I never kissed her, never touched her in any inappropriate way,” he said. He went on to say that T.I. had previously confronted him about the photo but that their first conversation didn’t turn violent.

But over the holiday weekend, Cottle posted another photo—this time of her with the boxer’s 14-year-old daughter, Iyanna, in Las Vegas. “Had to come celebrate with my new boo @moneyyaya Happy Birthday bae,” Cottle wrote. After attending the teen’s party, Cottle attended an afterparty thrown by Mayweather at a strip club, according to the boxer.

T.I. approached Mayweather early the next morning at the burger joint, and the two began to fight. Mayweather says that the rapper—best known for his hits “Dead and Gone” and “Whatever You Like”—told him “You do it in the ring, I do it in the streets.” The boxer reportedly responded, “I do it everywhere.”

During the altercation, the boxer reportedly told T.I. “control your b****.” He apologized for using that term in the interview with Bitchie. “I don’t want to say that about Tiny,” he said. “So I do apologize to Tiny because she cool people. She never been disrespectful to me.” 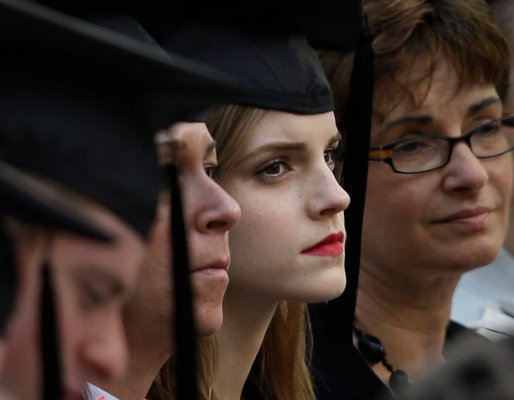 Emma Watson Graduates From Brown University
Next Up: Editor's Pick