U.S. To Boycott Sochi Paralympics In Protest Over Ukraine Incursion

The United States announced Monday it would boycott the upcoming Paralympic Games in Sochi to protest Russia’s incursion into Ukraine, as a State Department spokesperson said it was “likely” that the U.S. would impose sanctions on Russia.

The boycott effectively means a presidential delegation will not be attending the games, an announcement that comes as President Obama and Congress scramble to respond to Russia’s aggression on Ukrainian territory in Crimea.

“In addition to other measures we are taking in response to the situation in Ukraine, the United States will no longer send a Presidential Delegation to the upcoming Winter Paralympic Games in Sochi,” said Caitlin Hayden, a spokesperson for the president’s National Security Council. “President Obama continues to strongly support all of the U.S. athletes who will participate in the Paralympics and wishes them great success in the Olympic competition.”

State Department spokesperson Jen Psaki said Monday that sanctions on Russia were increasingly probable, given the escalation in tensions. “At this point we’re not just considering sanctions. We are preparing options and we are likely moving down that path if things proceed.”

British government officials are also boycotting the Winter Paralympics in Sochi, Agence France-Presse reports. Prime Minister David Cameron said Sunday he thought it would be “wrong” for government ministers to go to the Games given the unfolding events in Ukraine.

The boycott is the first definite measure Western leaders have taken to isolate Russia following Putin’s unprovoked attack in Crimea. Other measures discussed include expelling Russia from the G8 (which also includes the U.S., U.K., France, Germany, Japan, Italy and Canada) and imposing economic sanctions on the country.

The United Nations Security Council plans to meet Monday to discuss the crisis. In addition, the European Union’s 28 leaders will hold an emergency summit on Ukraine Thursday, reports the Associated Press. 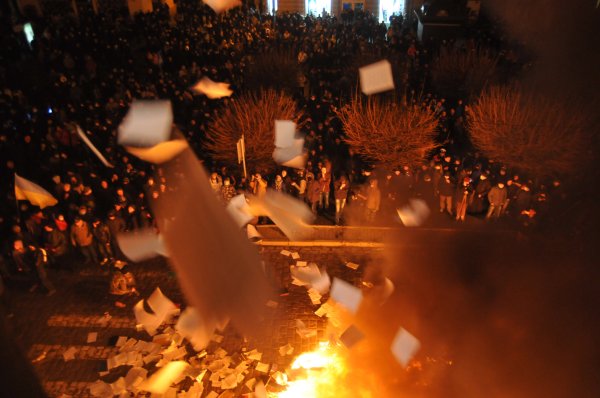