Narendra Modi was sworn in on Monday as India’s 15th Prime Minister, ringing in a new era of governance for the world’s largest democracy. Chief among the guests at the swearing-in ceremony in New Delhi was Pakistan’s Prime Minister Nawaz Sharif, among other South Asian leaders.

Modi led his Bharatiya Janata Party to a decisive victory in India’s national elections this month, winning 282 of 543 seats in the Lok Sabha, the lower house of Parliament. Fueled by a strong anti-incumbency sentiment across the country, it was the biggest victory for a single party in decades, and has given Modi and his administration a clear mandate to move forward with the reforms he promised voters throughout the five weeks of polling.

Speculation has been rife over whom Modi will appoint to his Cabinet to enact those changes, particularly to the crucial post of Finance Minister. One of Modi’s chief campaign pledges was to create jobs and get the floundering Indian economy back on a high-growth path, along with improving governance inside and outside the capital. Governance and job creation were both strong facets of Modi’s long-time tenure as chief minister of the western state of Gujarat.

Modi has already announced plans to streamline the national ministries, minimizing the number of Cabinet ministers and expanding government at the grassroots level outside the capital. In recent years, the implementation of expensive government welfare schemes, like India’s massive direct food aid program and a national employment-guarantee act, has been spotty because of poor implementation on the ground.

The attendance today of Sharif and other leaders of the South Asian Association for Regional Cooperation countries signals an early effort by Modi to strengthen political and economic ties in the region. Western leaders, including U.S. President Barack Obama, were quick to reach out to congratulate Modi after his party’s historic win. But while the U.S. in particular will continue to be an important ally to India, many observers expect that a government under Modi may take on a more Asia-centric approach to foreign policy. 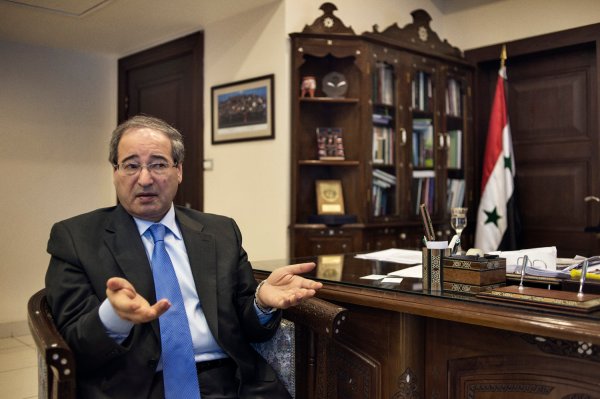 Syria's Deputy F.M. Vows to Wipe Out 'Terrorists'
Next Up: Editor's Pick