By inviting the president of Israel and the head of the Palestinian Authority to his Vatican home for a “prayer for peace,” Pope Francis picks up where Secretary of State John Kerry left off—using moral suasion to bring the two famously recalcitrant sides together in the same room. But in this case, Francis is leaving out the Israeli leader who matters most.

Prime Minister Benjamin Netanyahu, as head of government, is the key decision-maker in any peace negotiations with the Palestinians. Yet the Pope’s invitation from a Bethlehem mass on Sunday was extended not to Netanyahu but to Shimon Peres, the famously dovish 90-year-old statesman whose seven-year term in the largely symbolic office of president expires in two months.

Peres readily accepted the Pope’s invitation to travel to the Vatican for “a heartfelt prayer to God for the gift of peace,” as Francis put it. Palestinian leader Mahmoud Abbas said a quick yes, too. That puts together in a room two men of peace who routinely voice the need for a two-state solution to the as-yet-intractable conflict–and who, according to contemporaneous news reports, met discreetly several times in 2011.

As Peres tells it, he and Abbas came within a whisker of fashioning an agreement that would have resolved the matter by agreeing on the terms for fashioning a state called “Palestine” beside Israel.

But Netanyahu forbad Peres from closing the deal, according to Peres, who recounted the tortured history earlier this month to an Israeli television station, shortly after the apparent collapse of the Kerry negotiations.

And while there is nothing at all wrong with prayer, least of all for peace, the Pope’s invitation truly was one that neither side could refuse. The Israelis and Palestinians have been talking so long about peace – 20 years now, since the breakthrough known as the Oslo Accords that introduced then then-exciting idea of sitting down face-to-face with the enemy – that to be seen rejecting talks is to be viewed as the villain.

Both sides have strong incentives to be perceived as inclined toward an agreement, and both sides have strong incentives to avoid the particulars required to produce one. Which is why an invitation to keep things as vague as praying for peace is something of a godsend, especially coming from the most charismatic religious figure in the world. Where’s the downside in that?

None that’s apparent. But only a fool would rule out this Pope. After barely a year in office, the Argentine Francis has shown himself nothing if not a man of this world, shrewd, and deeply committed to challenging the status quo. It was en route through Bethlehem to the mass where he delivered his seemingly airy invitation that Francis made his unscheduled, quietly thrilling stop at the Separation Barrier. He prayed in silence, and briefly touched his head against the gritty concrete, possibly the way a ram does, in warning. 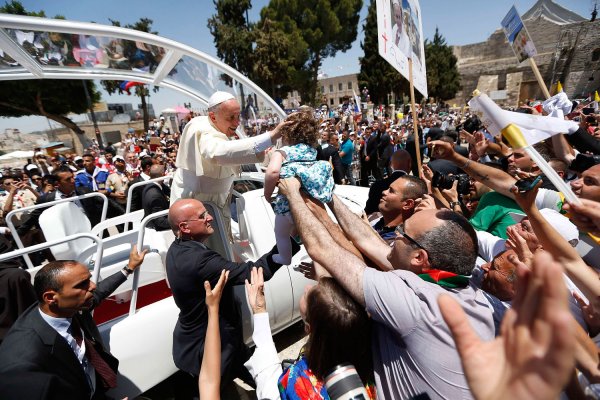